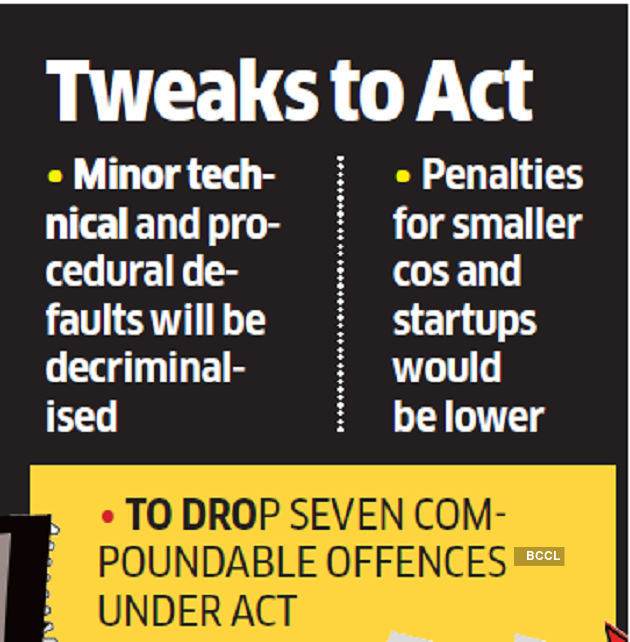 BENGALURU: The government’s move to bring in an Ordinance to decriminalise various sections of the Companies Act will help local startups and entrepreneurs in raising funds and attracting more riskaverse capital, experts and investors said. Finance minister Nirmala Sitharaman announced the decision while unveiling the last tranche of the government’s ?20 lakh crore economic stimulus package on Sunday.

Minor technical and procedural defaults such as shortcomings in Corporate Social Responsibility reporting, inadequacies in board reports, filing defaults and delay in holding Annual General Meetings will be decriminalised. The government has also decided to drop seven compoundable offences, while five will be dealt with under an alternative framework. Penalties for smaller companies and startups would be lower, she said.

Startup investors and industry experts said the criminality of minor offences and non-compliances under the Act was hurting valuations during fundraising and deterring risk-averse local investors from backing companies.

“From a startup perspective, it’s a welcome move because a lot of companies have been facing hurdles due to existing non-compliances and ensuing criminal liability, which was also having an impact on the valuation of such companies,” said Atul Pandey, partner at law firm Khaitan & Co.

It will weed out minor noncompliance issues and also help in raising funds from the domestic market, specifically from investors who have a low risk appetite, Pandey added.

“As a startup, the first couple of rounds of funding which are pre-institutional investors, there’s usually some sort of errors that happen and those get caught later on. Valuation of startups have gone down significantly because of accumulated fines, penalties which keep on compounding,” said Siddarth Pai, managing partner at 3one4 Capital.

The move to decriminalise violations will also result in better governance of startups as investors would be willing to take director seats and startups will also be able to attract higher quality independent directors, he added.

This would, in turn, encourage more domestic money to come into India’s startup sector. Sitharaman also said publicly listed companies in India will be allowed to list directly in foreign jurisdictions, and private companies, which list their non-convertible debentures on stock exchanges, will not be regarded as listed companies.

According to Pai, the move to allow private companies to list debentures on stock markets will aid startups in the NBFC space — which usually raise capital from other NBFCs or banks — in tapping public markets for debt.