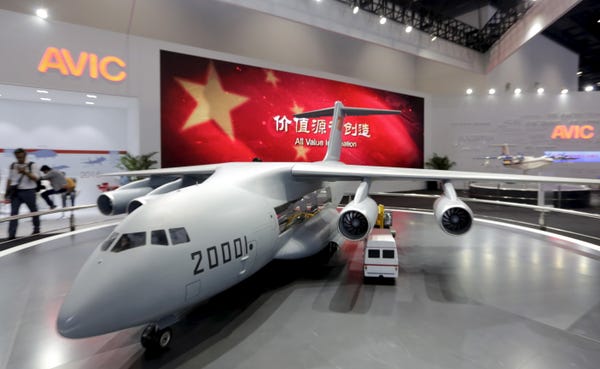 The huge aircraft was seen on the airstrip on the militarised reef in the Spratly Islands but was not observed loading or unloading cargo.

The images were posted on LinkedIn on Tuesday by Ken Joyce, director of product management at Maxar Technologies, an American space technology company. “Y-20 transport observed at Fiery Cross Reef. Detected by DeepCore AI/ML,” he said.

A Chinese military source confirmed the operation and said the Y-20 was deployed to test its capabilities. “It’s the first time China has deployed the Y-20 to the Spratlys,” the person said, without disclosing any further details.

The deployment of the airlifter came days ahead of China’s launch of three simultaneous 10-day military exercises in waters surrounding Hainan, its island province about 1,200km (745 miles) north of the Spratlys.

China’s home-grown aircraft carrier, the Shandong, and a Type 075 amphibious assault ship are taking part in the drills.

The Y-20, built by the Xian Aircraft Industry Corporation, is the biggest aircraft in China’s military fleet. Work is ongoing on the development of a new engine for the aircraft that could increase its load capacity by about 20%.

“However, without more info on the cargo it’s just speculation as to what mission the airlifter conducted [at Fiery Reef],” he said.

“That ambiguity itself creates abundant room for various types of signalling.”

China might have been using the deployment to show the PLA’s “expeditionary power projection ability”, particularly its ability to transport troops and equipment to far-flung outposts in the South China Sea.

“And politically, it appears to demonstrate that Beijing possesses the resolve to sustain its presence in the South China Sea, against what it perceives as US pressure,” he said.

China has developed Fiery Cross Reef into a military outpost, complete with radar and other communication facilities.

The international community, most notably the United States and Vietnam, has repeatedly criticised China’s build-up of military facilities on the artificial islands, saying it endangers freedom of navigation.

On December 22, the US destroyer USS John S. McCain sailed within 12 nautical miles of Mischief Reef, also in the Spratlys, which are known by Beijing as the Nansha Islands.

These new Samsung Q soundbars are a Dolby Atmo...