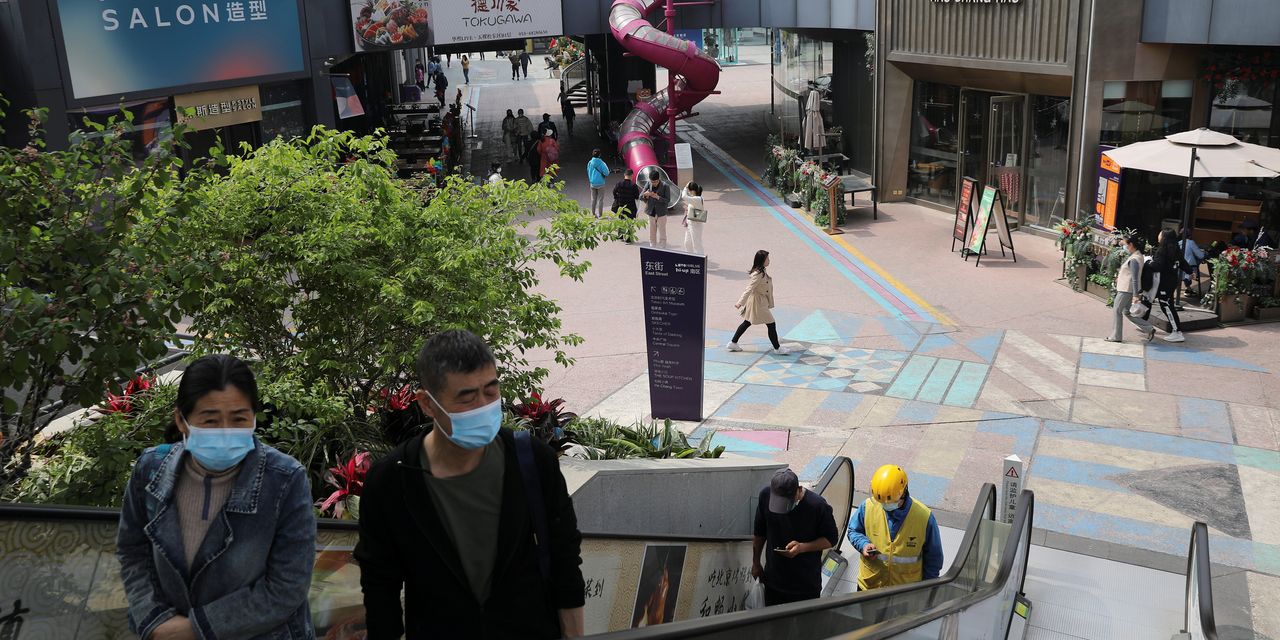 BEIJING—China’s economic activity grew at a slower pace in April as retail sales missed expectations, complicating the picture of a steady and balanced recovery in the world’s second-largest economy.

China’s industrial production in April was up 9.8% from a year earlier, slower than March’s 14.1% pace, the National Bureau of Statistics said Monday. Fixed-asset investment decelerated as well, to 19.9% in the January-April period from 25.6% in the first quarter.

Retail sales, a key gauge of China’s domestic consumption, underwhelmed: April’s figure was up 17.7% from the pandemic-hit level a year earlier, well short of March’s 34.2% pace.

Economists had largely expected the double-digit year-over-year percentage growth that major indicators delivered, given the low-base of comparison from a year earlier, when China’s economy had just begun to bounce back from the coronavirus shock. In the coming months, however, that “low-base effect” will fade, given the economy’s recovery during the spring and summer last year.

Monday’s figures on industrial output and fixed-asset investment actually exceeded the forecasts of economists polled by The Wall Street Journal, who had pegged 9.1% and 19.2%, respectively. Retail sales, however, missed their predicted 24.9%.

“
‘The problem is not the growth rate, but its unbalanced recovery.’
”


To strip out last year’s pandemic distortions, government statisticians and economists have benchmarked this year’s numbers against 2019’s. By that measure, official data showed industrial production up 14.1% in April, largely in line with March’s growth rate, while the pace of retail-sales slowed to 8.8% from March’s 12.9%.

The retail-sales miss was a particular disappointment for economists and policy makers, who have been watching for several months for signs of a tilt toward consumption-driven growth in the Chinese economy, after more than a year of expansion led by manufacturing and exports.

For the Chinese economy as a whole, says

an economist at Standard Chartered, “The problem is not the growth rate, but its unbalanced recovery. Some sectors, such as industrial activity, appeared to be too hot, while others, like service and consumption, haven’t yet recovered to pre-virus levels.”

China’s strong rebound from the Covid-19 pandemic last year was largely driven by its swift factory resumption and government-led investment, while household spending has repeatedly fallen short of expectations.

Pointing to the softness in domestic spending, the Chinese Communist Party’s Politburo—its top decision-making body—said last month that the economic recovery remains uneven and its foundation less than solid.

China’s gross domestic product reported a record year-over-year gain of 18.3% in the first quarter. That makes meeting Beijing’s official target of “above 6%” growth for 2021 a relatively light lift.

A personal, guided tour to the best scoops and stories every day in The Wall Street Journal.

an economist with Oxford Economics, told clients in a note Monday: While Beijing wants to dial down leverage generally, the persistently weak consumption numbers may increase “pressure to pursue a more pro-growth macro policy that could increase financial risks and leverage.”

In a briefing Monday,

a spokesman for China’s statistics bureau, acknowledged the imbalance in the economic recovery, but said the improving labor market and increasing household income would lift consumption.

an economist with ING Group, said April’s consumption weakness might prove short-lived, with figures for the five-day Labor Day holiday at the start of May indicating robust spending.

Over the holiday, Chinese people made a total of 230 million trips, marking the first time that traveler numbers topped pre-virus levels. The nation’s box office also broke records for revenue and number of moviegoers.

Meanwhile, though fewer cities in China reported rising home prices in April, average new home prices nationwide in April were up 4.45% from a year earlier, official statisticians said Monday, following a 4.36% year-over-year rise in March—underscoring the challenge that policy makers face in reining in home prices.

—Grace Zhu and Bingyan Wang contributed to this article.