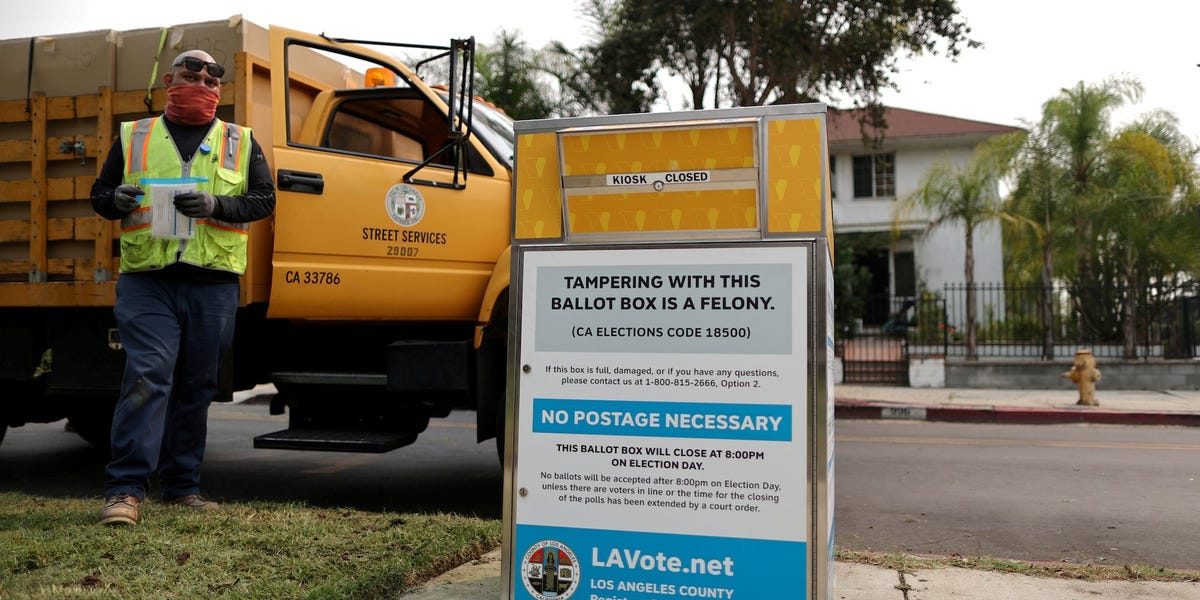 Party spokesperson Hector Barajas said on Tuesday that the party had put its own boxes out in the districts with the tightest races and now was considering expanding their use, according to the AP.

The AP reported Barajas as saying that the term “official” would be dropped from future versions. Some of the party’s boxes had been falsely given that label, which raised criticism for potentially confusing voters.

Californian election officials wrote to the state GOP with a cease-and-desist order on Monday, as Business Insider’s Charles Davis reported.

“Only county elections officials have the authority to determine the number, locations, and hours of vote-by-mail drop boxes,” said the letter to the GOP, from the office of California Secretary of State Alex Padilla.

A memorandum released by Padilla’s office on Sunday said: “State law does not authorize the use of unauthorized, non-official vote-by-mail ballot drop boxes.”

The practice of ballot harvesting — picking up someone else’s vote and delivering it for them — is not illegal in California, as Business Insider’s Grace Panetta reported. However, those ballots must be signed for by a specific person designated by the voter.

However, a later provision runs counter to that — a 2018 state law which says officials cannot disqualify ballots that arrive without a signature, according to the AP.

This, the agency reported, is cited by Republicans who say this means they can collect ballots via drop boxes.

Jessica Levinson, a professor at Loyola Law School, told the AP that unofficial boxes labeled “official” were clearly in breach of the law.

As for those without the label, she those were likely illegal also. Her reasoning was that the law covers people giving the ballot to someone they know, rather than putting it in a box for an unknown third party.

Historically, the California GOP has traditionally resisted measures like ballot harvesting and ballot boxes, while the state’s Democratic majority has passed laws allowing them, albeit in a regulated fashion.

“We are just working with the rules that Democrats put in front of us,” the AP reported Barajas as saying. “We’re basically playing on the chessboard they laid out.”

The embrace of ballot boxes in California — when they are run by the GOP — runs counter to GOP policy nationwide and President Donald Trump’s own statements, which have flatly equated any ballot boxes with voter fraud.

In an August tweet, Trump connected ballot boxes with the idea of “A Rigged Election” without evidence, seeding doubt over their effective monitoring.