Business activity in Europe jumps to a 21-year high. 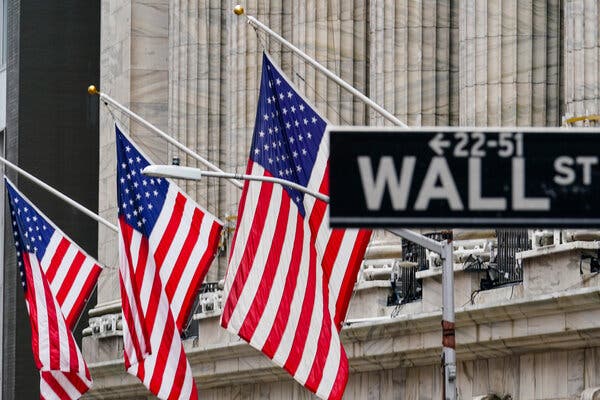 The pace of expansion of business activity in the eurozone hit a 21-year high in July, a new survey showed. The first reading of the Purchasing Managers’ Index rose to 60.6, up from 59.5 the previous month.

Across the region, the services industry got a boost from looser pandemic restrictions and higher vaccination rates that have encouraged tourism.

Manufacturing is still being restrained by shortages of critical products, which is causing input prices to rise. Analysts at IHS Markit, which published the report, also noted that business confidence had slipped to its lowest level since February as the Delta variant continues to spread.

But even as activity in Europe quickened, the same measure for Britain showed that the economic rebound there is slowing. The P.M.I. for Britain expanded, but at the slowest rate since March because of shortages of staff and materials, IHS said.

The fear that the economic recovery is faltering, in part because of the spread of the Delta variant of the coronavirus, appears to have receded among stock investors.

Bond buyers, though, are still spooked. The yield on 10-year Treasuries has been dropping for months and remains at just under 1.3 percent, near the lowest it has been since February, when the prospects for the economy were much shakier.

The DealBook newsletter asks: Who to believe?

A drop in yields usually signals slower growth ahead, which seems at odds with what’s happening. Yes, the Delta variant has delayed some reopening plans, but the economy generally appears to be expanding rather quickly. Most economists think 2021 growth will be the strongest since the mid-1980s.

That’s led some Wall Street strategists to conclude that the bond market is broken:

The big difference this time is that the government has spent trillions to pull the economy out of a deep recession. What if that masks something fundamentally awry? What if growth has already peaked? What if the new long-term ceiling is even lower than before? Mr. Atteberry considered this, “but then I come back to ‘nah,’” he said. “Rates are going to rise and the economy is going to do a lot better than it is now.”

G.M. has been weathering the shortage better than its rival Ford Motor, which this month is idling several North American plants that make trucks and sport utility vehicles.

In a statement, G.M. said its truck plants in Fort Wayne, Ind., and Silao, Mexico, will shut down next week because of the shortage of semiconductors, which serve as the computer brains in a wide variety of electronic components.

A plant in Flint, Mich., will go from three shifts of production per day to one shift, G.M. said.

“The global semiconductor shortage remains complex and very fluid,” the company said in a statement, “but G.M.’s global purchasing and supply chain, engineering and manufacturing teams continue to find creative solutions and make strides working with the supply base to minimize the impact to our highest-demand and capacity-constrained vehicles.”

The production cutbacks were reported earlier by CNBC.

Both G.M. and Ford have been making trucks and S.U.V.s without some critical components and storing them at plants until the missing parts become available. The technique is known in the auto industry as “building shy.”

G.M. idled some plants in the second quarter but was able to complete and ship some 20,000 vehicles that had been assembled without some components.

Earlier in the year, the automaker predicted that its profit would fall to about $500 million in the second quarter, from more than $3 billion in the first quarter, because of production halts from the chip shortage. But in June it said its financial results in the first half would be “significantly better” than it had forecast.

Carmakers have been expecting the chip shortage to ease in the second half of 2021. Ford reports its second-quarter earnings on Wednesday. G.M. follows with its report on Aug. 4.

Ford has had more serious issues because it has relied on a chip maker that had a fire at a plant in Japan. Both G.M. and Ford have tried to manage the shortage by allocating chips to plants that make their most popular and profitable vehicles and slowing production where slower-selling models are produced.

The shortage is crimping production when demand for new and used vehicles is strong as the economy gains strength and interest rates remain low.

Disruptions to vehicle production have left dealers with tight inventories and forced many consumers to pay close to list prices for new models.

The situation has been a boon for auto retailers. This week, AutoNation, a large dealership chain, reported its fifth record quarter in a row.

The rental market, which slumped during the pandemic, has snapped back more quickly than many economists predicted, and renters across the country are facing sticker shock.

Demand for apartments and single-family rentals is rebounding — and even looking hot in some places, Coral Murphy Marcos, Jeanna Smialek and Jim Tankersley report for The New York Times.

If rents continue to take off, it could be bad news both for those seeking housing and for the nation’s inflation outlook. Rental costs play an outsize role in the Consumer Price Index, so a meaningful rise in rent could help keep that closely watched government price gauge, which has picked up sharply, higher for longer.

Kaseya, the Miami-based company at the center of a ransomware attack on hundreds of businesses over the Fourth of July holiday weekend, said on Thursday that it had received a key that would help customers unlock access to their data and networks.

The mystery is how the company obtained the key. Kaseya said only that it had obtained the key from a “third party” on Wednesday and that it was “effective at unlocking victims.”

The development is among the latest mysteries surrounding the Kaseya attack, in which a Russia-based ransomware group called REvil, short for Ransomware Evil, breached Kaseya and used it as a conduit to extort hundreds of Kaseya customers, including grocery and pharmacy chains in Sweden and two towns in Maryland, Leonardtown and North Beach.

The attack set off emergency meetings at the White House and prompted President Biden to call President Vladimir Putin of Russia and demand that he address the ransomware attacks stemming from inside his borders.

Within days of the call, REvil went dark. Gone was REvil’s “Happy Blog,” where it published emails and files stolen from REvil’s ransomware victims. Gone was its payment platform. Its most notorious members suddenly disappeared from cybercrime forums.

It is unclear whether REvil took itself offline on its own volition or at the command of the Kremlin, or whether the Pentagon’s hackers at Cyber Command had played any role. But it was a loss for Kaseya’s victims, who were still in the process of negotiating to get data back when their extortionists suddenly vanished.

Kaseya’s announcement that it had recovered the key was a welcome twist. Often when ransomware groups do turn over decryption tools to victims who have met their extortion demands, the tools are slow or ineffective. But in this case, Brett Callow, a threat researcher at EmsiSoft, a security firm that is working with Kaseya, confirmed the decryptor was “effective.”