Brexit poll: Brits say leaving EU without a trade deal would be bad 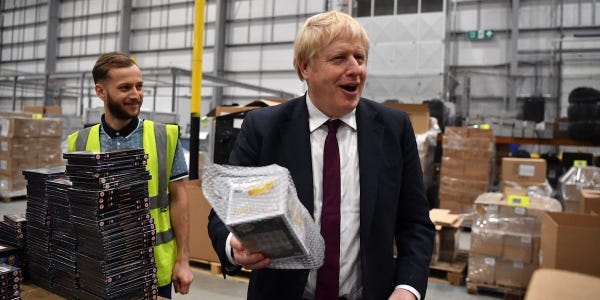 A new poll has found that a large majority of Brits believe that leaving the Brexit transition period without a trade deal with the European Union would be a bad outcome, despite Prime Minister Boris Johnson insisting otherwise.

With UK and EU negotiators in a race against time to strike a free trade agreement by the end of the year, nearly two-thirds of Brits — 64% — believe that failing to strike a deal before January 1 would be “bad,” according to the findings of a Focaldata poll for campaign group Best For Britain, shared exclusively with Business Insider.

Johnson last month insisted that leaving the Brexit transition period without a new trade deal would be a “good outcome” for the UK, even though it would result in costly new tariffs for businesses and potential border chaos.

The prime minister doubled down in an interview with the BBC last weekend, saying that “we could prosper mightily under those circumstances.” He told interviewer Andrew Marr: “I don’t want the WTO, Australian-type outcome particularly but we can more than live with it. I think the people of this country have had enough… they have had this for a long, long time, being told that this or that is impossible or intolerable.”

However, the findings published this weekend indicate that Johnson is out of step with the British public.

Asked whether it would be a “good outcome or a bad outcome” for the UK to “leave the transition period out of the European Union without a deal” at the end of the year, 64% said it would be a “bad,” according to the poll. Over a quarter of respondents — 26% — said leaving without a trade deal would be “very bad,” while 38% said “fairly bad.”

The poll found strong opposition to a no-deal outcome in every region of the UK surveyed — including in the northwest, northeast, and the Midlands, areas that are regularly associated with the vote to leave the EU in 2016.

The strongest opposition was in Scotland, where recent opinion polls have indicated growing support for independence from the rest of the UK. 78% of Scots said that leaving the Brexit transition period without a free trade agreement with the EU would be a bad outcome for the country, while just 23% said it was good.

The Scottish National Party’s Shadow Brexit Secretary Dr Philippa Whitford urged Johnson’s government to put the Brexit process on hold if striking a deal before the end of the year was not possible.

“At a time when we are navigating through a devastating global health pandemic – which has hit people’s livelihoods, jobs and businesses — it is beyond reckless that the Tory government is intent on also leaving the transition period at the end of the year,” she said.

37% of people told Focaldata that dealing with the EU without a trade agreement would be a “good outcome” for the UK.” 13% told the pollster that it would be “very good” and 24% said it would be “fairly good.” Focaldata interviewed 8,152 people between September 19 and 23.

Responding to the findings, Labour’s Shadow Chancellor of the Duchy of Lancaster Rachel Reeves told Business Insider: “It is crucial that the Government delivers the deal it promised the people at the general election in December.

“The last thing our country needs right now approaching a second wave of Covid-19 is crashing out without a deal in place and causing even more chaos and damage to jobs throughout the UK.”

The UK’s chief Brexit negotiator David Frost this week suggested that the two sides were moving closer to striking a trade deal before next week’s crucial European Council summit, indicating to two separate committees that the UK was prepared to budge on the thorny issues of state aid and fishing. Michael Gove, who Prime Minister Johnson appointed to oversee the UK’s Brexit preparation, estimated the chances of a deal being at “around” 66%.

Failure to strike a trade deal with the EU would unleash serious disruption in the UK. It would result in tariffs being slapped on goods coming to and from Europe, causing price-rises in UK supermarkets and making it more expensive for businesses to sell to the EU. It would also create the risk of delays to imports of food, medicine, and other goods.

Best for Britain CEO Naomi Smith told Business Insider: “This poll shows the country overwhelmingly wants the Government to end the transition period with a deal. No-deal has no mandate.”

Smith, whose group is campaigning for a UK-EU free trade deal, said: “It may not be the comprehensive ‘oven-ready’ deal that every Conservative MP promised when they stood for election last year, but a trade deal is still much better than the messy divorce that would result from leaving without a deal.

“The clock is ticking. The Prime Minister must now make a final push to secure a deal so that businesses aren’t staring down the barrel at a ‘perfect storm’ of Brexit and COVID this Christmas, and so that we aren’t stuck under a depressing cloud of UK-EU negotiations for years to come.”

Google users locked out after 15 years' use...

ICE may be mobilizing on Election Day for firs...