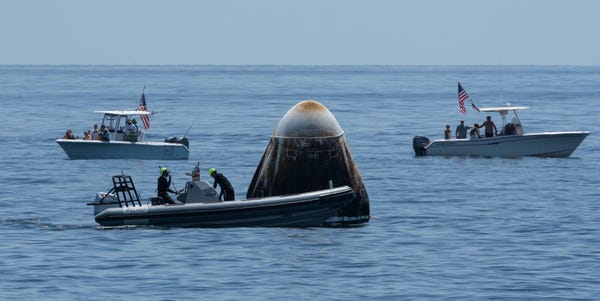 After a fiery plummet through Earth’s atmosphere, SpaceX’s Crew Dragon spaceship splashed into the Gulf of Mexico on Sunday, with NASA astronauts Bob Behnken and Doug Hurley tucked safely inside.

The landing completed the first crewed commercial spaceflight mission in history; the Crew Dragon launched Behnken and Hurley toward the International Space Station on May 30. They stayed there for two months before undertaking the risky return trip.

After landing, the capsule bobbed in the ocean for about 15 minutes as professional recovery boats sped to retrieve the astronauts — but they weren’t alone on the water.

The landing site off the coast of Pensacola, Florida drew a crowd of onlookers in their own boats. Some got very close to the spaceship, including a boat flying a Trump flag that sped in front of NASA’s live feed camera.

NASA Administrator Jim Bridenstine said in a briefing shortly after the splashdown that the crowd of boats “was not what we were anticipating.”

The US Coast Guard had cleared the area ahead of the landing, Bridenstine explained, but after the capsule splashed down, “the boats just made a beeline for it,” he said. “We need to do a better job next time for sure.”

The recovery team had to clear the private vessels from the area before it could retrieve the spacecraft, since the crowd could have posed a hazard to Behnken and Hurley.

“It became a little bit too close to the Dragon capsule,” SpaceX President and COO Gwynne Shotwell said during the briefing.

Coming too close could also have endangered the onlookers themselves, since poisonous fumes can surround the capsule after its landing.

In a statement issued to CBS, the Coast Guard said that it warned boaters multiple times ahead of the splashdown with radio alerts and physical warnings, yet lacked an order to legally enforce a hazard zone.

“[N]umerous boaters ignored the Coast Guard crews’ requests and decided to encroach the area, putting themselves and those involved in the operation in potential danger,” the statement read.

After the recovery boat lifted the Crew Dragon out of the water, the recovery team detected one such gas — nitrous tetroxide — in the air surrounding the ship. The team had to wait for the fumes to clear before Behnken and Hurley could climb out of the capsule.

The conclusion of the historic mission, called Demo-2, kicks off a new era of commercial spaceflight. NASA has contracted six round trips on Crew Dragon going forward to ferry astronauts to and from the space station.

In the future, Bridenstine said, NASA will probably need more resources to clear private boats from the ocean landing area and keep it clear.

“This was a demonstration mission. This is the time that you go learn about these things, and we’ll certainly be better prepared next time,” Shotwell said.

This story has been updated with new information.