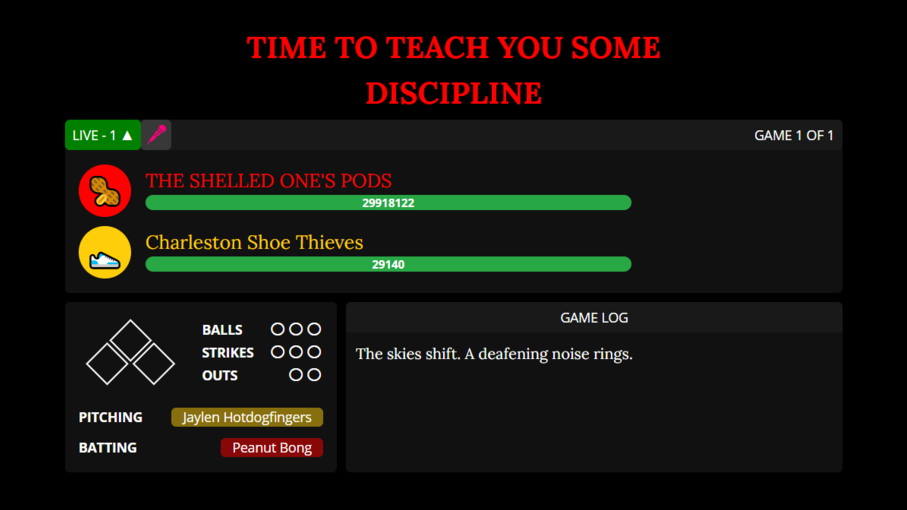 It’s been a few months since we last checked in with the cultural event of Blaseball, the not-quite-baseball league that lets fans bet fake coins on simulated matches between fictional teams. In the time since, much has happened. Through coordinated voting, fans made a successful attempt at necromancy, resurrecting Jaylen Hotdogfingers—albeit with a debt that led to mass incinerations. A giant peanut renamed a bunch of players Peanut, and started trapping any of the league’s most idolised players not named Peanut in giant peanut shells. A squid appeared.

Also, Blaseball was played—and gave fans all the highs, lows and camaraderie of actual sport, just watched through a text feed on a web browser. While it’s easy to get carried away with the magical realism of the overarching story of Blaseball, it’s worth keeping in mind that it’s all underpinned by a solid sports foundation—underdogs, incredible comebacks, and punishing, brutal defeats.

And now, revealed at the end of Season 9, there’s a seemingly undefeatable entity that is poised to wreak havoc on the league. After a gruelling battle against the Baltimore Crabs—who were heavy favourites to earn their third championship win—the Charleston Shoe Thieves staged an incredible comeback, with a bottom of the ninth triple homerun earning them their first Internet Series win. The celebration wouldn’t last long, as their prize for victory was being forced to play against an angry god’s thralls.

Luckily the whole thing was recorded for posterity. You can see it play out in the video below. The battle begins around 23:10.

To explain, fans have something of an antagonistic relationship with The Shelled One, the aforementioned giant peanut that represents one of the pantheon of Blaseball gods. Things came to a head at the end of Season 8, in response to players ‘wasting’ 100 million peanuts by donating them to the Hall Monitor—a squid—in tribute to dead players. We were officially placed on The Shelled One’s shitlist.

The Shoe Thieves were the first to receive punishment, as The Shelled One claimed all currently shelled players within the league and unleashed them against the champions. This new team—THE SHELLED ONE’S PODS—arrived loaded up with OP status buffs. Instead of a normal match, each strikeout and run scored depleted the opposing team’s spirit. This wasn’t a game but a JRPG boss fight—one of those scripted ones early in the campaign that the heroes cannot win. The Shelled One toyed with and taunted the Shoe Thieves, before ultimately leaving them defeated and cursed.

Season 10 is now about to kick off, and presumably this won’t be the last we hear from The Shelled One. You can see how it all plays out for yourself by signing up for a free account on the Blaseball site, although I also recommend taking a look at the wiki’s timeline for a recap of the story up to now.