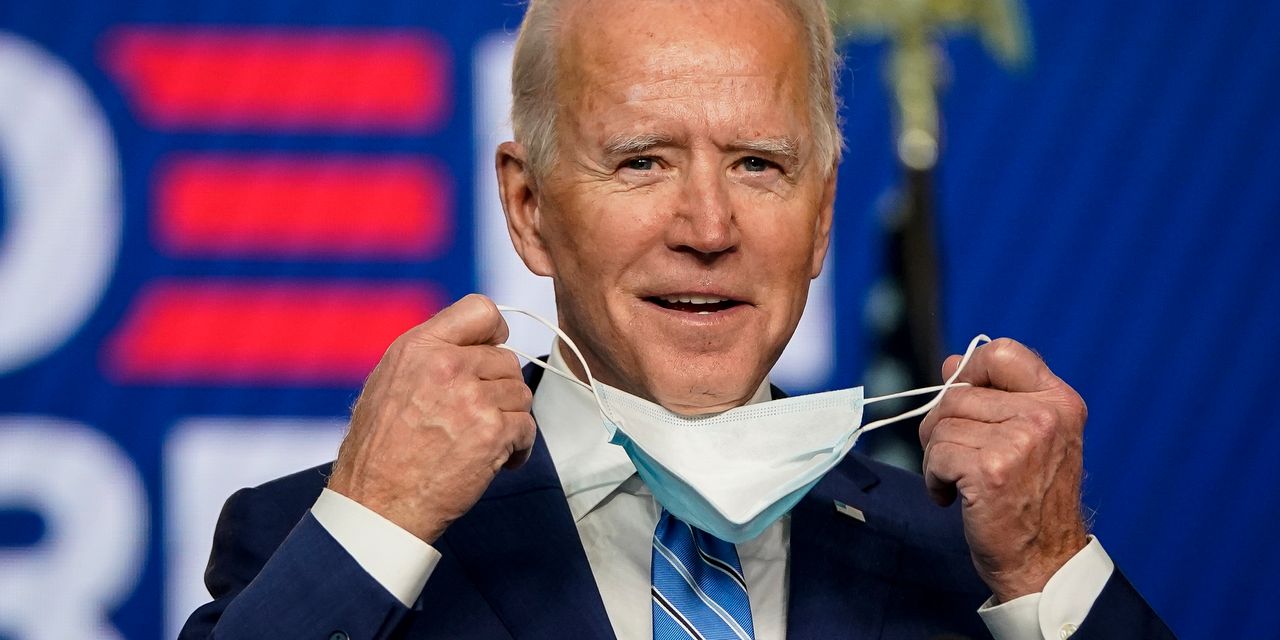 Joe Biden on Thursday looked to be closing in on becoming U.S. president-elect, while President Donald Trump’s campaign launched challenges to voting results in several states.

Two days after polls closed, the victor in the White House race was still not determined, but the Democratic challenger had a 264-214 lead over Trump in Electoral College delegates, according to Associated Press projections. It takes 270 to win.

For Trump to triumph, the Republican incumbent would have to run the table on the four swing states left to be called by the AP — Georgia, Nevada, North Carolina and Pennsylvania — while Biden just needs to win one of those battlegrounds.

See: Here’s what we know about the states whose Electoral College votes haven’t been called

Election officials in Georgia, where Trump has been slightly ahead, said on Thursday that about 60,000 ballots were left to count and that they expected to complete counting today. In a news conference, Biden’s campaign manager, Jen O’Malley Dillon, said the state “leans to” Biden since the outstanding ballots are from Democratic areas. Trump’s lead in the state has narrowed to just 0.26%.

“Our data shows that Joe Biden will be the next president of the United States,” she said.

In brief remarks following a coronavirus briefing in Delaware, Biden continued to counsel patience, saying, “Each ballot must be counted.”

But he added that he felt good about where things stand and said he had “no doubt” he and his running mate, Sen. Kamala Harris, would be declared the winners.

Trump remained defiant on Thursday night, saying that if the “legal” votes only are counted, he has won the election. “If you count the illegal votes they can try to steal the election from us,” he said at the White House, but did not provide evidence for that charge.

In Nevada, Biden’s lead over Trump went up to more than 11,000 votes as the latest votes were reported by counties in that state.

While the AP and Fox News both called Arizona for Biden on Election Night, there remained some doubts about the outcome in that state, with CNN and other news outlets not yet declaring a winner. NBC shifted its characterization of the state from “too early to call” to “too close to call” early Thursday.

Trump was pushing back through lawsuits and other means. His campaign filed suit in Michigan demanding increased access to locations where ballots are being counted. Suits were also filed in Georgia and Pennsylvania, and the campaign said it would ask for a recount in Wisconsin, where Biden’s edge is about 20,500 with 99% of votes counted.

Trump tweeted “STOP THE COUNT!” on Thursday morning. A senior adviser to his re-election campaign, Jason Miller, said Trump’s tweet had to do with how “states and localities should not be counting ballots that were mailed in or magically appeared in a sack of ballots after Election Day.”

“If these are legal ballots, and people are following the law, and they’re clearly postmarked, and they hold up, and we have signature matches where the localities have that, then obviously all legal ballots should be counted,” Miller told reporters on a conference call on Thursday. Some states’ laws allow for the acceptance of mail-in ballots arriving after Election Day as long as they were postmarked by Tuesday.

Miller said the AP and Fox News should walk back their calls on Arizona, and he touted a Pennsylvania appellate court’s ruling on Thursday morning that appeared to provide the Trump campaign’s observers with increased access to ballot-counting rooms in Philadelphia. That court’s decision was later overruled by the state supreme court.

Trump’s lead over Biden in Pennsylvania has shrunk to 1.51% with 88% of the vote in.

Miller and other campaign officials continued to project optimism about Trump’s prospects.

Bill Stepien, Trump’s campaign manager, said the media and Washington insiders have been “trying to count Donald Trump out for years,” but the president is “alive and well.”

on Wednesday had a historically strong post–Election Day outing.

“While the potential legal challenges to the results will loom, the market seems content to price to what appears the net result: Biden in the White House and a divided Congress,” said Ian Lyngen, head of U.S. rates strategy at BMO Capital Markets, in a note on Thursday. He also said there are “building expectations the election outcome will be called (for the first time) by this weekend.”

In the battle for control of the U.S. Senate, Republicans beat back challengers in several states that Democrats had hoped to win, leaving Democrats increasingly looking short of the pickups needed to take control of the chamber.

As the market nosedived last year, my older br...