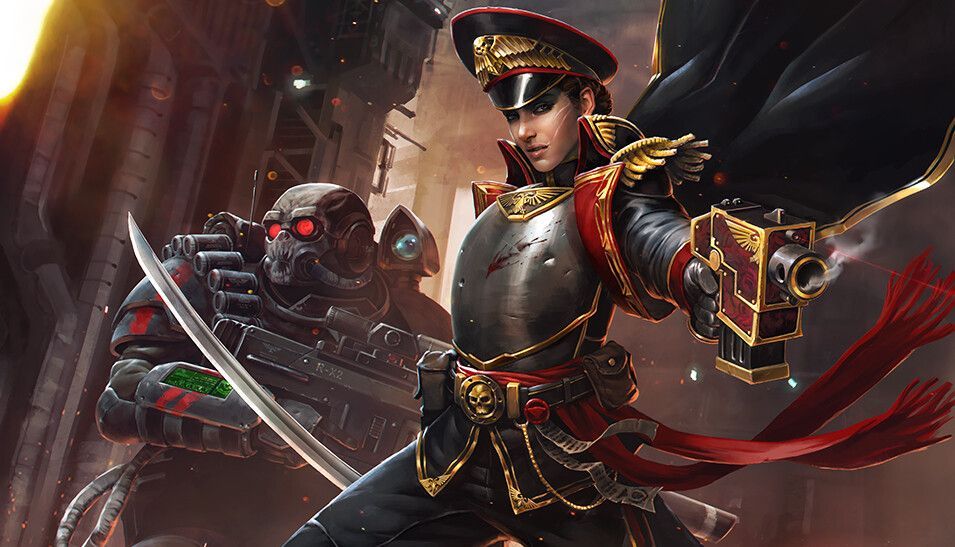 Douglas Adams used to add the word “hyper” to things to make them sound more sci-fi. The authors of the best Warhammer 40,000 books do the same thing, only their prefix of choice is “mega”. Orks pilot mega bommers and mega gargants. The Imperium’s agri-worlds are threshed by mega-harvesters, and its industrial worlds powered by megafurances. Spider-like aliens? They are called, delightfully, “megarachnids”.

It’s the perfect word for 40K, a science-fantasy setting based on taking everything too far, then pushing it further. Not content with extrapolating the future to a reasonable distance, it imagines 38 or 39 millennia ahead (individual books hop around the timeline) to a galaxy that’s full to bursting with evil empires who are all at war with each other and frequently themselves.

They’re pretty extra when it comes to gore and dismemberment as well, the writers competing to find new ways to describe violence. Some of the books are clever and twisty, but they always find room for something to be painted with arterial spray, or a head to pop like a specific over-ripe fruit or vegetable. In one turn of phrase that will stay with me till I die, someone’s intestines flopped out like gray snakes. You don’t get that anywhere else.

The other thing 40K books push beyond reason is their quantity. There are so many it’s hard for new readers to find a way in, and easy for regular readers to miss books they’d enjoy in the megaflood. Here are the best 40K books.

If you want to dip a toe in the dark future, Deathwing is a short-story anthology that gives a solid overview of the setting’s breadth. Devil’s Marauders by Bill King is about a company of Imperial Guard racing to escape their own bombardment across a planet where trees are so big their branches form highways. Charles Stross writes about a judge and an assassin dispatched to bring an entire world back under Imperial control, while Storm Constantine writes about psykers falling in love while their ship travels through the alternate reality horrorshow of the Warp. Heck, there’s even a couple of stories about space marines.

For a standalone novel, read Lord of the Night. It’s about a traitor marine searching a hive city for a relic, which he does by terrorizing its inhabitants from the shadows while talking like a Frank Miller protagonist. As he murders his way through the city’s gangers and underclass, an apprentice inquisitor tries to convince her superiors that he exists, and that they should actually care there’s an evil Batman out there ripping apart disposable citizens.

The Eisenhorn books turn 40K into hardboiled fiction, with Inquisitor Eisenhorn as a Raymond Chandler detective narrating in first-person. His investigations into Chaos frequently lead to conflict with the machinery of the Imperium he’s supposed to protect, which plays well with the genre’s cynical view of authority. Eisenhorn’s written by Dan Abnett, one of the better 40K writers but one with a weakness—endings that feel rushed. The third book in the Eisenhorn trilogy suffers from this, but waiting on the other side is a sequel trilogy called Ravenor. Ravenor jumps genre and protagonist, following an inquisitor who works with a team of badass specialists. Suddenly it’s more like the X-Men than The Big Sleep, a change that revitalizes the series and makes it worth sticking with.

For classic military sf, Gaunt’s Ghosts is the series you want. Colonel-Commissar Ibram Gaunt is an unusually compassionate officer, dedicated to keeping alive a regiment who are the only survivors of a dead world. Unfortunately for them, the war engine of the Imperium is full of glory hounds and bastards happy to throw away thousands of lives to move a trench forward half a mile. While the enemies faced by the Ghosts are terrible, Gaunt struggles just as much against the orders he’s given.

Ciaphas Cain is another series about an unusual commissar, only what makes Cain different is that he’s a liar and fraud. Cain schemes his way out of responsibilities and danger, and ends up taking credit for every triumph, accompanied by a filthy sidekick named Ferik who plays Baldric to his BlackAdder. The Ciaphas Cain books are more comedic than most 40K fiction—if Gaunt’s Ghosts takes Bernard Cornwell’s Sharpe stories and moves them from Waterloo to Warhammer, the Ciaphas Cain books are George MacDonald Fraser’s Flashman Papers shifted to the 41st millennium.

Then there’s the Dark Coil, which isn’t a formal series, but a name for Peter Fehervari’s 40K stories, connected by an esoteric tangle of recurring characters, places, and themes. Start with Fire Caste, which follows an Imperial Guard regiment called the Arkan Confederates who walked straight out of a western and have names like “Kletus Modine”. They join an endless war against the tau on a planet covered in fungal jungle and a maze of rivers called the Dolorosa Coil. It’s a “war is hell” story, Apocalypse Now if it was about cowboys versus aliens who wear anime battlesuits. The short story Vanguard is its epilogue, and from there anything with the name Peter Fehervari on it leads further into the Coil.

For a non-human perspective, try The Infinite and the Divine. It’s about the necrons, pseudo-Egyptian cybermen who were tricked out of their souls and into immortal machine bodies, and have been mad about it for millennia. Trazyn the Infinite is so obsessed with the past he fills a museum with warriors in stasis like life-sized collections of Warhammer miniatures, while his rival Orikan the Divine can see the future and even alter it, which he uses for reasons as petty as jury-tampering. One of the funnier 40K books, it extrapolates the idea of beings who essentially cannot die to imagine an entire species filling infinity with pointless one-upmanship—as well as plays that take literal decades to perform and nobody enjoys.

Honourbound is another book about a commissar, but where Gaunt and Cain are atypical, one of the first things Severina Raine does in Honourbound is execute one of her own soldiers for cowardice. Which is exactly what commissars are meant to do. And yet, Raine comes off sympathetic, as do the soldiers who serve under her—even though one’s an addict who does some terrible things and the others are so superstitious they shun the psyker attached to their squad and call her a “witch”. Written in present-tense, Honourbound constantly pauses to dive into the thoughts of its ensemble cast, peppering the battles and intrigue with psychological insight that makes it as much character study as war story.

The Horus Heresy line jumps back 10,000 years to a formative point in the setting’s history. Like most prequels they’re better experienced after the stories they’re set before, full of foreshadowing that pays off if you know what’s coming. The first three are the essential ones: Horus Rising, False Gods, and Galaxy in Flames. In these, the perspective is split between superhuman space marines and ordinary remembrancers—artists, photographers, poets, and journalists brought along to record their Great Crusade for posterity, who instead witness its fall into corruption and betrayal. It’s a look at the Imperium before religious dogma dominated it, imperfect but far from “the cruelest and most boody regime imaginable” it becomes.

Unfortunately the Horus Heresy books were a victim of their own success, selling well enough that initially modest plans were expanded into a line that numbers over 50 books, full of padding and stories that bounce back in the timeline to fill gaps no one cares about. A rare exception is Legion, a spy novel that uses yet another of 40K’s grand pointless wars as a backdrop. Other than that, the best way to approach the later Heresy books is to cherry-pick ones that focus on factions or characters you’re already interested in and skip the rest.

When Marvel Comics got the 40K licence the result was both a solid introduction to the setting for comics readers, and an enjoyable blast of the old megaviolence. Marneus Calgar is a five-issue series about how the chapter master of the Ultramarines first became a space marine, told in flashback as a tech-adept tries to discuss the finer points of budgeting ammunition with him. This is constantly interrupted by battles with entire armies of heretics, pages of impaled bodies and blood. Which is great.

The other 40K comic worth reading leans into comedy even harder. Deff Skwadron is about ork fighter pilots in junker planes with three speeds: stop, fast, and “Waaagh!” They act like The Dam Busters on a raid, if you replaced tactics with pure brutality and a belief that parachutes are for wimps. The dogfights are chaotic, sketchy swirls of ink where engine parts and limbs fly through the air like confetti at a wedding. Deff Skwadron is an older one and can be hard to find in print, but worth it.