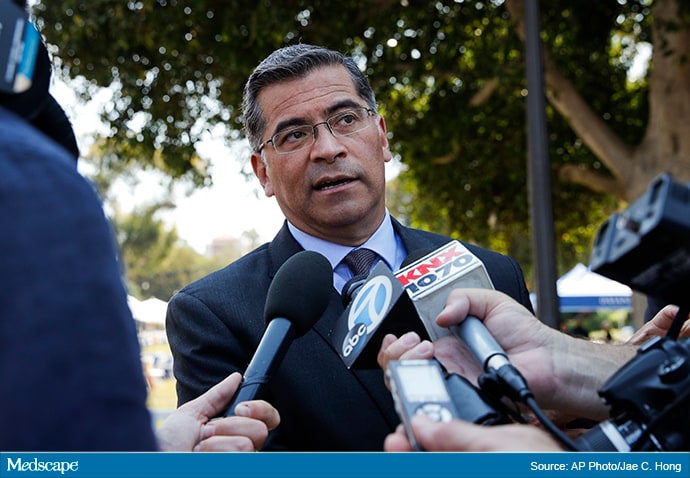 In this Thursday, Aug. 2, 2018, file photo, California Attorney General Xavier Becerra talks to reporters after a news conference at UCLA. President-elect Joe Biden has picked Becerra to be his health secretary, putting a defender of the Affordable Care Act in a leading role to oversee his administration’s coronavirus response.

WILMINGTON, Del. (AP) — In choosing Xavier Becerra to be his health secretary, President-elect Joe Biden tapped a robust defender of the Affordable Care Act who will face questions about whether he possesses the health care and management experience needed to lead the massive effort to vaccinate a nation against a deadly pandemic.

As California’s attorney general, Becerra leads the nation’s largest state justice department, an influential perch from which he’s fought Republican efforts to roll back health coverage. But he has been less involved in the day-to-day work to combat the coronavirus, is not a health care expert and has not overseen an office as sprawling as the Department of Health and Human Services.

With the U.S. expected to begin vaccine distribution in the coming months, few Cabinet posts will have such influence over the nation’s ability to move past the pandemic, an effort that will likely define the Biden presidency. Allies of Becerra, a former congressman who would be the first Latino HHS secretary at a time when the pandemic is taking a disproportionate toll on people of color, say he’s well suited for the role.

“He has skills that sometimes are beyond expertise,” said Rep. Jimmy Gomez, D-Calif., who represents the Los Angeles-area district near where Becerra served for some two decades. “Leadership skills, management skills, an understanding how the Hill works, how the Senate works.”

If confirmed by the Senate, Becerra would lead a $1 trillion-plus agency with 80,000 employees and a portfolio that includes drugs and vaccines, leading-edge medical research and health insurance programs covering more than 130 million Americans. Becerra, 62, tweeted Monday that in Congress he helped pass the Affordable Care Act and as California’s attorney general he has defended it.

“As Secretary of Health and Human Services, I will build on our progress and ensure every American has access to quality, affordable health care — through this pandemic and beyond,” he wrote.

Biden was drawn to Becerra’s working-class roots, his longtime effort to increase access to health care, including in communities of color, and his work with Republicans to expand the Affordable Care Act in California and the ability of patients to get coronavirus treatments, according to two officials familiar with his decision-making process who spoke on condition of anonymity because they were not authorized to speak publicly.

Becerra and the rest of Biden’s health team will be unveiled on Tuesday at a moment when the president-elect is under growing pressure to ensure that his Cabinet is diverse. Biden and Vice President-elect Kamala Harris, the nation’s first Black woman to serve in the post, are also set to meet with a number of civil rights groups, including the NAACP and the National Action Network, which are expected to stress the need for more Black members of the Cabinet.

And in a call organized by the Congressional Asian Pacific American Caucus on Monday, Asian American Democrats pressed members of the Biden transition team expand the number of those of Asian descent in leadership posts.

“I was very disappointed,” said Rep. Judy Chu, D-Ca., the caucus chair, after the 30-minute meeting with Biden’s team. “We felt that our voices weren’t being heard.”

Biden’s choice of Becerra smooths, but does not end, the concerns of the Congressional Hispanic Caucus pushing for Latino representation in one of the top-four Cabinet positions. Beyond Becerra, whose mother was a Mexican immigrant, the caucus has also pressed for a role for Tom Perez, the current chair of the Democratic National Committee and former labor secretary.

“As members, we think this was a huge step forward,” Gomez said. But he added: “More needs to unfold.”

“Let’s not forget, the Trump administration picked people who were totally unqualified for a lot of positions, and at the same time looked a certain way and feel a certain way and came from a certain perspective,” he said, “so I think that having this diversity is going to be good.”

“If you want to take on a forward-leaning state that is prepared to defend its rights and interests, then come at us,” Becerra told reporters hours after being named to the job.

As HHS secretary, Becerra would also be responsible for overseeing the Office of Refugee Resettlement — the office responsible for caring for unaccompanied minors who enter the U.S. illegally — which some Democrats saw as giving him a leg up, particularly because of his work on immigration. As attorney general, Becerra helped lead a coalition of fellow state attorneys general who sued over the Trump administration’s child separation policies.

Republicans immediately made clear their attack lines on the pick. Sen. John Cornyn of Texas argued that he was unqualified because he lacked ties to the health care or pharmaceutical industries while Sen. Mike Braun of Indiana blasted his support for “Medicare for All.”

In a break with some of his previous picks, which emphasized familiarity, Biden does not know Becerra well. Nor does Becerra have deep ties to Harris; while Becerra took over her old job, he had spent most of his career in Washington while Harris was coming up through politics at home in California.

Typically, the HHS secretary’s job requires political connections, communications skills, managerial savvy, a willingness to learn about complex medical issues and a creative legal mind to use vast regulatory powers without winding up on the losing end of lawsuits.

As a former 12-term congressman, Becerra will enter the job knowing Capitol Hill but will need to establish ties with governors who will play outsize roles in distributing the coronavirus vaccine. A close relationship with the president is also paramount; the current health secretary, Alex Azar, repeatedly drew the ire of President Donald Trump during the pandemic.

Some of the nation’s most talented doctors and researchers work for HHS agencies like the National Institutes of Health, the Food and Drug Administration and the Centers for Disease Control and Prevention. The idea for Operation Warp Speed, the effort to quickly develop coronavirus vaccines, was hatched within the FDA.

HHS wields much of its authority through rule-making, and that will be particularly important to Biden if his policy agenda is hamstrung by a closely divided Congress. The major industries regulated by HHS have deep pockets and stables of top-notch lawyers, always capable of countering policy with lawsuits, and Biden aides believe that Becerra’s time suing the Trump administration over the last four years will help him avoid similar pitfalls.