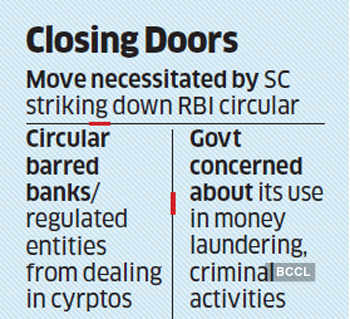 NEW DELHI: India is looking to introduce a law to ban cryptocurrencies, as the government sees a legal framework as being more effective than a circular from the Reserve Bank of India (RBI) in this regard. “A note has been moved (by the finance ministry) for inter-ministerial consultations,” a senior government official told ET.

The spur for the draft cabinet note was the March 4 decision of the Supreme Court to quash the April 2018 circular from the RBI that prevented banks from providing services in support of cryptocurrencies, said the official cited above.

The note will be sent to the cabinet after consultations and, subsequently, to Parliament. If it is along similar lines as an earlier proposal, the law will deal a blow to investors, exchanges and other entities dealing in virtual currencies such as bitcoin, experts said.

A high-level government panel, in July 2019, prepared a draft law providing for a ban on all forms of private cryptocurrencies. It had suggested a fine of up to Rs 25 crore and imprisonment of up to 10 years for anyone dealing in them.

At the time, the court had said: “While we have recognised… the power of RBI to take a preemptive action, we are testing in this part of the order the proportionality of such measure, for the determination of which RBI needs to show at least some semblance of any damage suffered by its regulated entities. But there is none.”

The ruling lifted a de facto ban on trading in bitcoin and other such instruments and had prompted startups to say they would revive plans to invest and expand business in India.

However, the going hasn’t been smooth, industry experts said. Several banks haven’t allowed payments for currency trades in India or overseas, in the absence of any specific communication from the RBI following the Supreme Court decision. Still, transactions have been taking place through other channels, the experts said.

The draft rules in the July 2019 proposal were too harsh, said one of them. Such a proposed legislation would make it “illegal to hold, sell, issue, transfer, mine or use cryptocurrencies and, if passed in the current form, would completely decimate the crypto-industry in India,” said Amit Maheshwari, partner, AKM Global.

He hoped the government would conduct stakeholder consultations and not go ahead with the bill in its present form.

The panel, headed by former finance secretary Subhash Garg, had, in its report, advocated a ban on all forms of private virtual currencies, though it asked the RBI and the government to look at introduction of an official virtual currency.

The draft law prepared by the committee said any direct or indirect use of cryptocurrency will be punishable with a fine or imprisonment, which shall not be less than one year, but may extend up to 10 years.

As per the draft law, a repeat offence will be punishable by imprisonment of up to five years, which could extend to 10 years with a fine. The fine could be three times the loss or harm caused by the person, three times the gain made by a person, or up to ₹25 crore.