Home > General > Apple Watch 6: teardown reveals surprises on the inside

Apple Watch 6: teardown reveals surprises on the inside 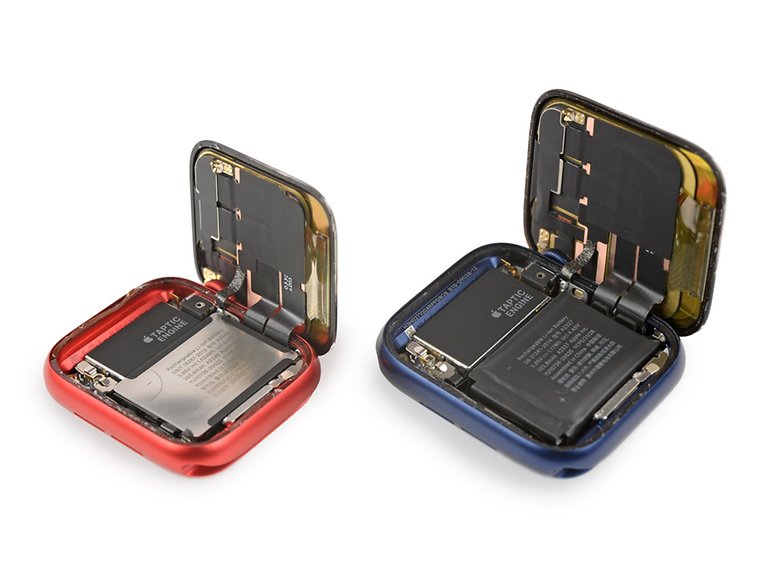 A look under the hood of the Apple Watch Series 6 reveals a positive surprise, especially for those interested in the smaller smartwatch model.

Once again, the colleagues at iFixit pulled out their screwdrivers and other tools to give us a look behind the displays of the latest Apple hardware. In this case, it’s both models of the new smartwatch: the Apple Watch Series 6 in 40 and 44 mm went under the “knife”.

As already suspected since the first beta versions of watchOS 7, the new Apple Watch no longer contains the necessary technology for Force Touch. iFixit noticed during the teardown that the gasket for the pressure-sensitive display is no longer present in the newest models. The loss of Force Touch is unfortunate, but this component could easily be destroyed during a repair of the Watch. Therefore iFixit counts the discontinuation as a win.

However, Apple itself still speaks of battery life of up to 18 hours. However, a look at the Apple Watch Series 5 overview shows improved life of the battery during training and audio playback. These figures have consistently increased by one hour for the Series 6.

In addition, the new Apple Watch also charges a bit faster. 80 percent is now supposed to be reached after just one hour, with the Series 5 it took another 90 minutes. The Series 6 reaches full charge after only 1.5 hours, while the previous model needed 2.5 hours, according to Apple.

Further changes also became apparent when looking at the Taptic Engine, which among other things is in charge of sending notifications to your wrist. According to iFixit, the new component has grown compared to the older Watch. What effect if any this has on the strength of the notifications is not yet known.

Overall, iFixit also found that the new case has become a little bit thinner. Instead of 10.74 mm, only 10.4 mm were measured. The missing force-touch seal could have had a big part in this.

A closer look inside the new sensor on the underside of the Apple Watch Series 6 was not dared. According to iFixit, a teardown here would only end in many broken pieces.

For reparability, iFixit gave the Apple Watch Series 6 a total of 6 out of 10 possible points. There were deductions for the use of special screws and the direct connection of many cable connections with Apple’s S6 SiP (System in Package). If a defect should occur here, a repair is extremely tricky.