Antibiotics or Appendectomy? Both Good Options 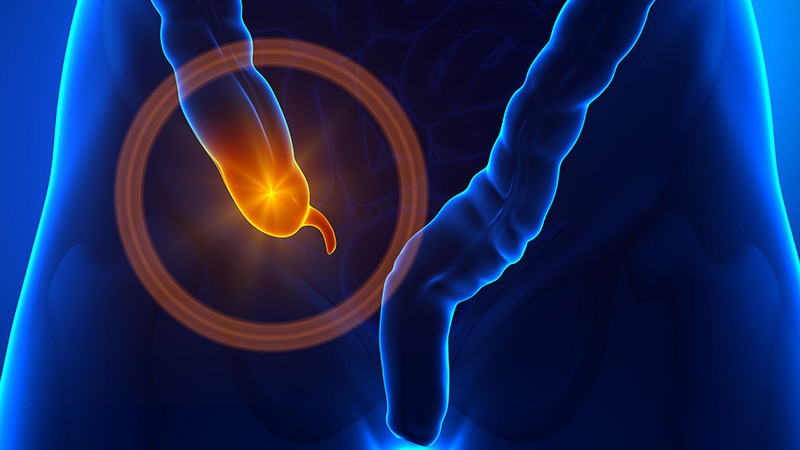 Patients given antibiotics for appendicitis fared no worse in quality of life, at least in the short term, than did patients whose appendix was removed, according to a large, randomized, nonblinded, noninferiority study published online October 5 in The New England Journal of Medicine.

One expert says the body of data, including this trial, indicate that the best appendicitis treatment now comes down to individual patients and choice.

David Flum, MD, director of the Surgical Outcomes Research Center at the University of Washington in Seattle, Washington, and colleagues conducted the Comparison of Outcomes of Antibiotic Drugs and Appendectomy (CODA) trial, which compared a 10-day course of antibiotics with appendectomy for patients with appendicitis at 25 US centers.

Although some may interpret the study as praising the potential role of antibiotics, the author of an accompanying editorial warns against rushing to antibiotics, even during a pandemic when hospital resources may be strained.

In the study of 1552 adults (414 with an appendicolith), 776 were randomly assigned to the antibiotics group and 776 to appendectomy (96% of whom underwent a laparoscopic procedure).

After 30 days, antibiotics were found to be noninferior to appendectomy, the standard of treatment for 120 years, as determined on the basis of 30-day scores for the European Quality of Life–5 Dimensions (EQ-5D) questionnaire (mean difference, 0.01 points; 95% CI, −0.001 to 0.03).

EQ-5D at 30 days was chosen as the primary endpoint because it has been validated as an overall measure of health after appendicitis treatment and the 30-day time frame mimics the typical recovery period for appendectomy, Flum and colleagues explain.

However, editorialist Danny Jacobs, MD, MPH, president of Oregon Health and Science University in Portland, Oregon, points out that about a third (29%) of the patients in the antibiotics group had undergone appendectomy by 90 days.

Appendicolith, a well-established potential complication, he acknowledges, was the main driver of the need for surgery (41% with that complication needed appendectomy), but it was not the sole reason.

Additionally, the number of emergency department visits was nearly three times higher in the antibiotics group, and more time was spent in the hospital by that group, Jacobs points out.

He notes that the article mentions circumstances such as the COVID-19 pandemic may figure into consideration when weighing antibiotics against appendectomy. But he warns that there also may be a danger of treatment bias in vulnerable populations and that COVID-19 has highlighted disparities in care overall.

“It will be important to ensure that some people, in particular vulnerable populations, are not offered antibiotic therapy preferentially or without adequate education regarding the longer-term implications,” Jacobs writes.

Flum told Medscape Medical News he agrees with Jacobs that the potential for bias is important.

“We should all be worried that new healthcare options won’t be equally applied,” he said.

But he and his coauthors offer an alternative view of the results of the study.

“In the antibiotics group,” they write, “more than 7 in 10 participants avoided surgery, many were treated on an outpatient basis, and participants and caregivers missed less time at work than with appendectomy.”

Flum said, “[T]hat’s going to be attractive to some patients. Not all, but some.”

Douglas Smink, MD, MPH, chief of surgery at Brigham and Women’s Faulkner Hospital in Boston, Massachusetts, told Medscape Medical News that he sees this study as an argument for surgery remaining the go-to option for appendicitis, unless there is a safety reason for not performing the surgery.

Patients come in and want their appendix out immediately, he said, and surgery offers a quick option with short length of stay and few complications.

Additionally, he said, if patients are told that with antibiotics, “there’s a 1 in 3 chance you’re going to need [an appendectomy] in the next 3 months, I think most people would say, ‘Just take it out then,’ ” he said.

Can Research Decide Which Is Best?

The controversy has been well studied. But with no clear answer in any of the studies about whether appendectomy or use of antibiotics is better, should the current study put the research to rest?

Flum told Medscape Medical News that this study, which is three times the size of the next-largest study, makes clear “there are choices.”

Previous trials in Europe “did not move the needle” on the issue, he said, “in part because they didn’t include the patients who typically get appendectomies.”

He said their team tried to build on those studies and include “typical patients in typical hospitals with typical appendicitis” and found that both surgery and antibiotics are safe and have advantages and disadvantages, depending on the patient.

Smink says one thing that has been definitively answered with this trial is that patients with appendicolith are “more likely to fail with antibiotics.”

Previous trials have excluded patients with appendicolith, and this one did not.

“That’s something we’ve not really known for sure but we’ve assumed,” he said.

But now, Smink says, he thinks the research on the topic has gone about as far as it can go.

He notes that none of the trials has shown antibiotics to be better than appendectomy. “I have a hard time believing we are going to find anything different if we did another study like this. This is a really well-done one,” he said.

“If the best you can do is show noninferiority, which is where we are with these studies on appendicitis, you’re always going to have both options, which is great for patients and doctors,” he said.

The study was funded by the Patient-Centered Outcomes Research Institute. The original article lists the authors’ relevant financial relationships. Jacobs and Smink reported no such relationships.

Marcia Frellick is a freelance journalist based in Chicago. She has previously written for the Chicago Tribune and Nurse.com and was an editor at the Chicago Sun-Times, the Cincinnati Enquirer, and the St. Cloud (Minnesota) Times. Follow her on Twitter at @mfrellick.