All the power you need (some MIUI quirks you don’t) 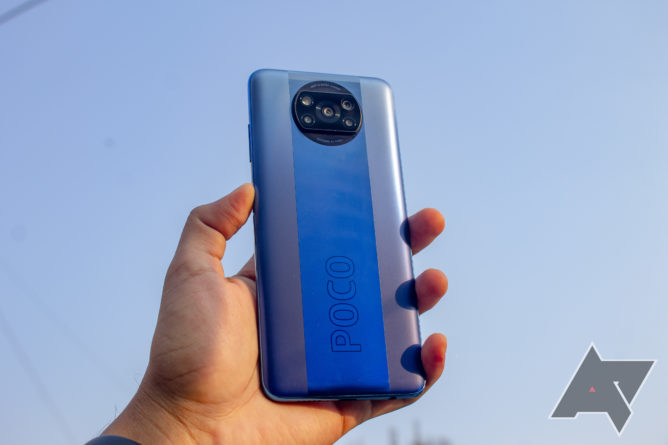 The Poco F1 was one of Xiaomi’s most popular phones, and it continued to sell well long after its announcement, and people have been begging for a true successor — that’s how hard it was to beat the value it offered. But that was a 2018 phone, and the increasing cost of components, rising costs associated with supply chain bottlenecks, and the forcing of 5G modems in high-end chips had made it difficult for Poco to do an encore… until now.

The Poco X3 Pro may not follow the same naming scheme, but it’s the true successor to the F1 that we’ve all been waiting for. It’s all about power, and the Snapdragon 860 at its helm manages to trump phones that cost a lot more. There are a few compromises, but it shouldn’t deter the spec-obsessed to jump on the phone.

It’s clear where Poco’s priorities are with the X3 Pro — offering the best performance in its price segment. It is because of this the X3 Pro has a beefy battery, a space-taking heat sink; it’s not striving to win any accolades for handleability. However, this might be a plus for gamers in that there’s more phone to grip onto.

The polycarbonate back has a glossy racing stripe running right through the middle, flanked by a matte finish — basically the same design as the Poco X3, but I’m not complaining. There are three colorways to choose from – Graphite Black, Steel Blue, and Golden Bronze. I don’t mind the use of a polycarbonate back (it makes the phone lighter and doesn’t get as warm as glass) but the powerful stereo speakers make the back vibrate. This may be enjoyable while gaming but it could get annoying in other scenarios.

For your viewing pleasure, there’s a 6.67-inch FullHD+ IPS LCD panel, and Poco has made sure to not hert(z) its gaming crowd — it boasts of an adaptive 120Hz refresh rate and a 240Hz touch-sampling rate. Undoubtedly, it makes browsing through the interface a breeze and gaming really responsive. Just make sure to dump the pre-applied screen protector if you want your fingers to glide.

Aside from raw speed, the display isn’t great. There’s a little bit of shadow around the punch-hole and the viewing angles are just okay. Also, even though the phone is HDR10 certified, I couldn’t get HDR content to play on Netflix. But all in all, it’s a decent display for the price but it won’t hold its own against the Redmi Note 10 Pro max that offers a brighter display with better contrast and brightness levels.

If you’re not big on routing your gaming audio through the dual stereo speakers, there’s a 3.5mm headphone jack — a dying breed. There’s even an IR blaster at the top that can help you switch on the air conditioner (or any other appliance that can be controlled via a remote) when your gaming session heats up.

Apart from the phone, obviously, the box includes a 33W adapter, a USB Type-A to Type-C cable, and a transparent silicon case that should change its color to yellow pretty soon.

The Poco X3 Pro ships with MIUI 12 based on Android 11, with Poco UI on the top. However, the differences between Poco’s UI and MIUI on Redmi phones have almost completely dissolved, and I can’t point out a single feature that’s not available on Redmi phones. One difference I could find is that Poco UI doesn’t have the Google Discover feed to the left of the homescreen. Interestingly, Poco claims that its interface is “clean” and “ad-free” (claims that Redmi doesn’t make) even though it does have some bloatware and a system app (GetApps) that sends out spam notifications.

In spite of all that, the MIUI 12 experience is good, and it includes a bunch of useful features like floating windows, smart home controls in the notification panel, ultra battery saving mode, and a lot more.

I do have one problem with respect to the software, though — it’s very aggressive with RAM management. In order to save resources, it quite frequently kills open apps, making them reload even if you go back to them just a few minutes later. For a phone that’s all about performance and gaming, this isn’t a great look.

Moving on to hardware, the Poco X3 Pro boasts one of the most powerful chipsets in this price segment, the 7nm Qualcomm Snapdragon 860. Yes, it is a rebadged variant of the Snapdragon 855+, but there are a few tweaks such as a higher clock speed. It also supports new camera features like ultra-wide lens night mode and selfie night mode.

Unsurprisingly, the chipset with its powerful Adreno 640 GPU, handles pretty much everything you throw at it. It can play Call of Duty: Mobile at max graphic and frame rate settings. Genshin Impact, a game that brings pretty much any phone in this price range to its knees, plays with aplomb, too. There’s also a liquid cooling system in place which helps prevent the phone from overheating during long gaming sessions.

The Poco X3 Pro isn’t just a sprinter—it can go the distance. The 5,120mAh battery should last you an entire day even if you game for a couple of hours. If you find yourself in a dire situation, the phone’s ultra battery saving mode should help you eke out a few more hours.

The phone ships with a 33W proprietary charger in the box that takes about an hour and 30 minutes to juice up the phone, which is okay. I’m actually more impressed Poco included support for 26W USB-PD that’s almost as fast and works with more plugs.

There isn’t much emphasis on the X3 Pro’s cameras — no fancy 108MP sensor here — and that’s not surprising. What you get is a quad-camera setup consisting of a 48MP wide, an 8MP ultrawide, a 2MP depth, and a 2MP macro. The only one that takes good images, though, is the primary one. Surprise, surprise.

While I’m not sure how much the flagship-level ISP of the Snapdragon 860 is responsible for this, the images from the 48MP camera are pretty good in daylight scenarios. There’s some really good dynamic range on display and details are plenty. It even did a respectable job with edge detection while taking portraits. Color reproduction is on the saturated side, but that’s not necessarily a bad thing. Night mode shots are decent, but the Poco X3 reduces noise so aggressively that it can fuzz details.

The ultrawide can take some usable shots, but images lack sharpness, and there’s a color temperature disparity. For what it’s worth, there is a dedicated night mode for the ultrawide (which most Poco and Redmi phones don’t have) that does deliver a slightly better image. The macro sensor is borderline unusable, and you’ll have to take a ton of photos to get a single serviceable shot from it.

As for videos, the primary sensor is capped to take [email protected] videos even though the processor does support [email protected] There’s no OIS here, and EIS does a very mediocre job at delivering shake-free videos. There is a stabilization video mode but it limits videos to [email protected] If you really care about taking good videos with your smartphone, the Poco X3 Pro is surely not the best phone in its segment.

If all you care about is performance, the Poco X3 Pro is the most powerful phone in its segment — the Snapdragon 860 along with 8GB of DDR4x RAM and UFS 3.1 storage help clinch this title easily. The raw power of the phone makes it our go-to recommendation for anyone looking for a gaming phone on a budget. Features like a powerful stereo speaker setup, a 3.5mm headphone jack, a cooling system, and a high-refresh-rate display further improve the gaming experience.

In this sense, the X3 Pro is very much the successor to the F1 that we’d all been waiting for. But just like the F1, this definitely isn’t the phone for everyone. The okayish display, the chunkiness, and the average camera performance take away some points. If these things matter to you, the Redmi Note 10 Pro (AKA the Note 10 Pro Max in India), the Moto G60, or the Realme 8 Pro may be far more suitable for you. But if power is all you’re hungry for, there’s enough for you to chew on here.

I’ve had some more time to spend with the Poco X3 Pro and I still stand by it: you can’t get a better performing phone in this price segment (unless the iQOO 3 gets a drastic discount yet again). I’ve been playing a lot of BGMI since its release a couple of weeks ago, and the phone’s hardware strengths come across clearly.

The Snapdragon 860 can handle the game without making the phone too hot to handle; the polycarbonate back helps. The 240Hz touch sampling does its job in making FPS games more responsive, and the impactful speakers definitely add a layer of immersion.

What’s even better is that I never feel constrained by battery life. Even with a couple of hours of gaming, the X3 Pro comfortably coasts through an entire day and then some more. This is one of those phones that will condition you to not look at the remaining battery level. With support for 26W USB-PD charging, you will be able to charge quickly even if you don’t carry the 33W charger that comes with the X3 Pro.

The only performance hitch is the RAM management. MIUI is aggressive about closing apps, and even with 8GB of RAM, apps don’t sit in the background for very long.

I’ve noticed more quirks in MIUI 12 that are worth pointing out, too. It forces you to use the three-button navigation method when using third-party launchers, a shortcoming that other device makers eliminated months ago. Plus, the rotation suggestion button is missing, and some app notifications are a mess. For example, messages from different conversations on WhatsApp aren’t bundled, and new messages trigger a floating notification of an older message. Also, I’m not sure if it’s just my device, but I’ve noticed the phone drop the refresh rate even when it’s set at 120Hz.

None of these quirks are deal-breakers but there’s definitely room for Poco to iron out the inconsistencies. All in all, if you can put up with the chunky design, the software quirks, and the mediocre display and camera setup, the Poco X3 Pro is a powerful phone that should easily power your gaming sessions.