ACS Disagrees With CDC on HPV Vaccination in Adults 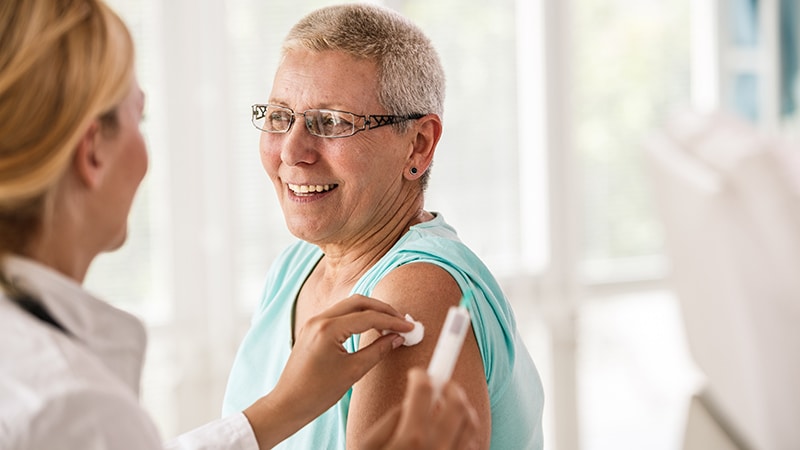 The American Cancer Society’s new guidance on human papillomavirus vaccination diverges from the Centers for Disease Control and Prevention’s recommendations.

The ACS has endorsed two recommendations made by the CDC’s Advisory Committee on Immunization Practices, but the ACS does not agree with a third recommendation for older adults.

The ACIP recommends shared clinical decision-making regarding human papillomavirus (HPV) vaccination in some adults aged 27-45 years who are not adequately vaccinated. The ACS does not endorse this recommendation “because of the low effectiveness and low cancer prevention potential of vaccination in this age group, the burden of decision-making on patients and clinicians, and the lack of sufficient guidance on the selection of individuals who might benefit,” wrote Debbie Saslow, PhD, of the ACS’s section on human papillomavirus and gynecologic cancers, and colleagues.

Dr. Saslow and colleagues detailed the ACS recommendations in CA: A Cancer Journal for Clinicians.

The ACS endorses both of these recommendations. It also advises clinicians to tell patients aged 22-26 years who haven’t received the HPV vaccine or completed the series that the vaccine is less effective at reducing the risk of cancer at older ages.

After the Food and Drug Administration approved the HPV vaccine for adults aged 27-45 years, the ACIP updated its recommendations to state that routine catch-up vaccination is not recommended for anyone aged over 26 years. However, the ACIP recommended that these older adults talk with their providers about the risks and benefits of the vaccine to determine whether to get it.

The ACS subsequently conducted a methodological review of the ACIP’s recommendations and published its own adapted guidance, stating that the ACS does not endorse the shared decision-making. Administering the HPV vaccine to adults aged over 26 years would only prevent an estimated 0.5% of additional cancer cases, 0.4% additional cases of cervical precancer, and 0.3% additional cases of genital warts over the next 100 years, compared with vaccination under age 26.

“In addition to the low effectiveness and low cancer prevention potential of vaccination in this age group, other considerations included the burden of decision-making on patients and clinicians and the lack of sufficient guidance on the selection of individuals who might benefit,” according to the guidance. The ACS also expressed concern that these provider-patient discussions could interfere with the public health goal of increasing HPV vaccination in younger people.

HPV vaccination rates have lagged substantially behind other routinely recommended childhood vaccinations. Just over half (51%) of U.S. teens aged 13-17 years were up to date with HPV vaccination, and 68% had received one dose of the vaccine in 2018, according to the National Immunization Survey.

It’s very uncommon for a professional medical organization to not endorse recommendations from the CDC, particularly with vaccines, according to Robert A. Bednarczyk, PhD, an assistant professor of public health at Emory University, Atlanta, who specializes in HPV vaccination research but was not involved with the ACS statement or the ACIP recommendations.

He acknowledged the ACS’s reasons for not endorsing the ACIP’s HPV recommendations in older adults: the burden of shared decision-making given the communication issues, the vaccine’s lower effectiveness in this population, and the ongoing HPV vaccine shortage.

But Dr. Bednarczyk also pointed out that the ACIP’s recommendation opens the door to these discussions when they may actually be needed, such as in adults at greater risk for HPV. He cited data suggesting that, in 2015, divorces occurred in 24 out of 1,000 married people aged 25-39 years and 21 out of 1,000 people aged 40-49.

“When you consider these marriages that end, in addition to marriages that end when one spouse dies, there is a potential for individuals who previously had a low risk of HPV acquisition now entering into new potential sexual relationships,” Dr. Bednarczyk said. “Additionally, it has been estimated that approximately 4% of the U.S. population are in open or consensually nonmonogamous relationships, where exposure to more sexual partners may increase their risk for HPV. These are just some examples of where conversations with health care providers, and shared clinical decision-making, can help with a targeted reduction of HPV risk.”

The ACIP recommendation regarding adults aged 27-45 years also provides people in this age group with insurance coverage for the HPV vaccine if they choose to get it, Dr. Bednarczyk pointed out. Insurance companies may not be required to cover HPV vaccination in people aged over 26 years without the CDC’s recommendation, even if it’s not for routine immunization.

Dr. Bednarczyk agreed, however, with how the ACS adapted the CDC’s recommendation for routine vaccination in youth. The CDC’s routine recommendation is at ages 11-12 but can begin at 9 years, according to the ACIP. The ACS guidance qualifies this statement to place more emphasis on encouraging the vaccine earlier.

“Routine HPV vaccination between ages 9-12 is expected to achieve higher on-time vaccination rates, resulting in increased numbers of cancers prevented,” according to the ACS. “Health care providers are encouraged to start offering the HPV vaccine at age 9 or 10.”

Dr. Bednarczyk pointed to some of his past research finding low proportions of teens fully vaccinated against HPV by age 13 years (J Infect Dis. 2019 Jul 31;220[5]:730-4). Therefore, “any efforts to encourage vaccination, including starting the series at ages 9-10 years may help,” he said.

He also agreed that there may be diminished effectiveness with vaccinating adults aged 22-26, “but this should also be considered relative to an individual’s risk of acquiring HPV.”

While an HPV vaccine shortage is a major concern and HPV vaccination efforts should remain most focused on young teens, adults should not necessarily be neglected, Dr. Bednarczyk noted.

“Given how common HPV infection is in the population, open discussion between patients and health care providers can help identify those adults for whom HPV vaccination can be effective,” he said.

The development of the ACS guideline was supported by ACS operational funds. The ACS has received an independent educational grant from Merck Sharp & Dohme for a project intended to increase HPV vaccination rates. Dr. Saslow is the principal investigator for a cooperative agreement between the ACS and the CDC to support the National HPV Vaccination Roundtable and is coprincipal investigator of a cooperative agreement between the ACS and CDC to support initiatives to increase HPV vaccination. The remaining authors and Dr. Bednarczyk reported no relevant disclosures.