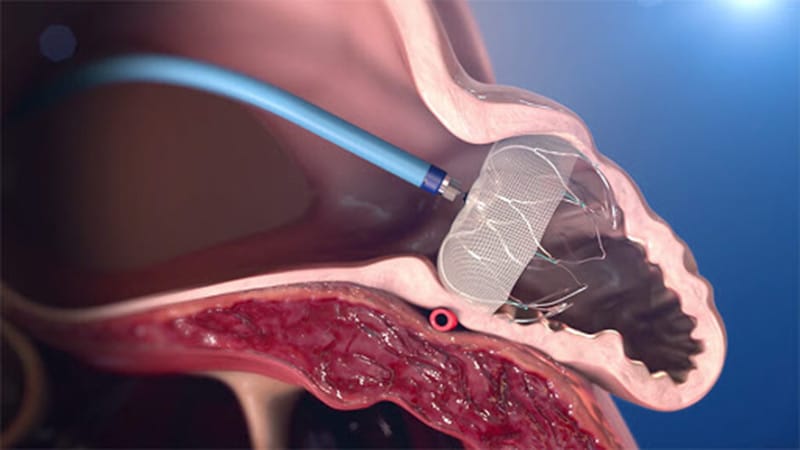 Early results from the massive National Cardiovascular Data Registry Left Atrial Appendage Occlusion Registry indicate that the rollout of the Watchman device into routine clinical practice is going smoothly, with a higher implant success rate and a substantially lower in-hospital complication rate than that seen in the pivotal randomized clinical trials, James V. Freeman, MD, reported at the joint scientific sessions of the American College of Cardiology and the World Heart Federation. The meeting was conducted online after its cancellation because of the COVID-19 pandemic.

These real-world results are particularly impressive because the 38,158 registry participants were on average significantly older and sicker than were patients in the clinical trials. They were at higher risk of both stroke and bleeding, yet they fared better in terms of procedural safety, observed Dr. Freeman, an electrophysiologist and director of the Yale University Atrial Fibrillation Center in New Haven, Conn.

“You always worry that once you get outside of the clinical trials setting and you roll out to a large number of centers, including some that are relatively low volume, that you’re going to start to see higher rates of complications. And overall, broadly speaking, the rates of adverse events were quite reassuring,” he said.

The registry, maintained by the ACC, serves as the postmarketing surveillance tool mandated by the Food and Drug Administration and Centers for Medicare & Medicaid Services. The 38,158 participants make this registry the world’s largest patient experience with the Watchman device by many orders of magnitude. Dr. Freeman’s report included patients enrolled during 2016-2018 who were treated at 495 hospitals by 1,318 physician interventionalists. CMS reimbursement requires participation in the registry, which captures more than 95% of all Watchman procedures done in the United States. Although Dr. Freeman presented only the acute in-hospital outcomes, active follow-up for adverse events and medical therapy will be conducted at 45 days, 6 months, and 1 and 2 years.

Participants in the Left Atrial Appendage Occlusion (LAAO) Registry averaged 76.1 years of age, which is 2-4 years older than patients in the pivotal PROTECT-AF and PREVAIL trials or the 1,025-patient EWOLUTION registry. The LAAO Registry participants had a mean CHA2DS2-VASc score of 4.6, compared with 3.4 in PROTECT-AF and 3.8 in PREVAIL. Their mean HAS BLED score was 3.0. Thirty percent had a prior ischemic stroke or transient ischemic attack, 12% had a prior intracranial hemorrhage, and 69% had a history of clinically relevant bleeding. Thirty percent had heart failure, 92% were hypertensive, and 30% had diabetes.

“The take home here is that these patients were at moderate to high risk of stroke and they also carried a high risk of bleeding and therefore had some relative contraindication to anticoagulation,” according to the cardiologist. “The patient population overall is really in accordance with the CMS guidance. We’re not seeing a lot of patients who are getting this device for a lifestyle indication. Most of these patients are really stuck between a rock and a hard place.”

Most hospitals offering the Watchman did 10-40 cases per year. The median annual physician volume was 12 cases. However, there was substantial variation in both hospital and physician volumes.

The device was deployed in 93% of procedures attempted; roughly half of cancellations were cause by LAAO thrombus detected on the day of the procedure. The acute procedural success rate when the device was deployed was 98.3%, compared with 90.9% in PROTECT-AF and 95.1% in PREVAIL. The rate of device margin residual leak of 5 mm or more among registry participants with an acutely successful procedure was 0.2%.

The rate of any major in-hospital complication in the LAAO Registry was 2.16%, the most common of which was pericardial effusion requiring intervention, which occurred in 1.39% of cases. The major bleeding rate was 1.25%. The stroke/transient ischemic attack rate was 0.17%. Systemic arterial embolism was a rare event, occurring in less than 0.01% of patients, as was acute MI, with an incidence of 0.04%. Device embolization occurred in 0.07% of patients.

By comparison, the 7-day rate of pericardial effusion requiring intervention was 4.0% in PROTECT-AF and 1.9% in PREVAIL, with procedure-related stroke rates of 1.1% and 0.7%, respectively, and device embolization rates of 0.4% and 0.7%. The major bleeding rate in PROTECT-AF was 3.5%, nearly triple that in the real-world registry.

Discussant Mark A. Estes, MD, characterized the acute outcomes in the LAAO Registry as “an improvement – a considerable improvement – over some of the early data in PREVAIL and PROTECT-AF.” He credited this to the “very robust validation procedure” the Watchman closure device has undergone, which included the clinical trials, regulatory requirements for training and patient selection, and mandatory reporting of outcomes in the registry.

He noted that a lot is happening now with the Watchman device. There are a couple of dozen prospective clinical trials, including one on the Watchman versus direct oral anticoagulant (DOAC) therapy and another on left atrial ablation plus left atrial appendage closure versus a DOAC. A new-generation Watchman device, the Watchman FLX, is approved in Europe and undergoing an ongoing FDA-mandated approval trial in the United States.

“It has a lot of technical advantages,” according to Dr. Estes, an electrophysiologist and professor of medicine at the University of Pittsburgh.

Current guidelines give LAAO a class IIb rating, meaning it “could be considered” in patients with atrial fibrillation at increased risk of stroke who have a contraindication to long-term anticoagulation. Dr. Estes asked: Does the LAAO Registry data warrant a rating upgrade to a stronger recommendation?

Dr. Freeman replied that the new data should allay the guideline writers’ and government regulators’ concerns regarding acute procedural safety. But that’s only part of the picture. He and his coinvestigators are busy gathering data on intermediate-term outcomes, analyzing the impact of various strategies for periprocedural and long-term management of antiplatelet and anticoagulant medications with an eye toward identifying best practices, and investigating the relationship between procedural volume and outcomes, information, which could have an impact on the next iteration of the guidelines.

In an accompanying editorial, Dhanunjaya Lakkireddy, MD, commented that an important contribution of the LAAO Registry is its inclusion of an enormous number of patients with contraindications to oral anticoagulation, a population excluded from the PROTECT-AF and PREVAIL randomized trials.

The short-term results of the registry suggest a relaxation of the current strict requirement for surgical backup during Watchman procedures is in order, added Dr. Lakkireddy, professor of medicine at the University of Missouri, Columbia, and medical director of the Kansas City Heart Rhythm Institute (J Am Coll Cardiol. 2020 Mar 13;75[13]:1519-22).

Dr. Freeman reported serving as a consultant to Boston Scientific, which markets the Watchman, as well as to Medtronic, Janssen, and Biosense Webster.