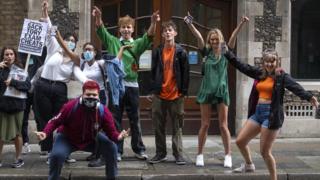 Universities are preparing to deal with a rise in calls from students after ministers in England, Northern Ireland and Wales said A-level grades could now be based on teachers’ assessments.

Pupils who were rejected from universities last week on the basis of grades downgraded by an algorithm may now be able to revisit their choices.

But universities are warning there is a limit to what they can do.

Monday’s U-turn followed an outcry from students, teachers and some Tory MPs.

About 40% of A-level results were downgraded by exams regulator Ofqual, which used a formula based on schools’ prior grades.

Students reacted by holding protests across the UK, calling the grading system unfair, classist and a threat to their future.

Mr Williamson said No 10 had worked with the watchdog to design “the fairest possible model” after exams had to be cancelled due to the coronavirus pandemic, but it had become clear the process had resulted in “more significant inconsistencies” than could be dealt with by an appeals process.

The algorithm was meant to moderate the process of awarding grades to prevent teachers awarding what the exams watchdog described as “implausibly high” marks to pupils.

But it came under fire for its perceived unfairness and, particularly, the way it appeared to penalise bright children from disadvantaged schools.

The government’s U-turn means teachers’ assessments will also be used for GCSE results, due to be published on Thursday.

These centre assessment grades, as the government calls them, have been decided by schools after taking into account available evidence, including non-exam assessments and homework, and attempting to make a “fair and objective judgement”.

It is still unclear what the climbdown will mean for students taking specialist work-related qualifications, known as BTecs. Mr Williamson said he hoped they would also be subject to teacher-assessed grades, adding that the government was working with the “awarding authorities” to ensure this happened.

Alistair Jarvis, chief executive of Universities UK which represents vice-chancellors, has called for “urgent clarification” following the policy change and for the government to “step up” by supporting universities through the challenges it has created.

He warned that while 70% of students were placed with their first choice institution, those who were not should “think carefully about their next steps” and seek advice from their preferred institutions.

Mr Jarvis said the change would mean there were more students with the grades to match the offer of their first-choice university.

“This will cause challenges at this late stage in the admissions process – capacity, staffing, placements and facilities – particularly with the social distance measures in place,” he said.

Gavin Williamson has said that the extent of problems with England’s A-level results only became clear at the weekend.

But some Tory MPs are frustrated that there were months to prepare for this and problems weren’t spotted earlier, even after the issues in Scotland became clear a fortnight ago.

Questions are not just being asked of the government though – some MPs think Ofqual could have done more to avoid this crisis. Mr Williamson himself has said he asked repeatedly for reassurances and was told the system was fair.

There’s also the fact that there have been U-turns across the UK now, including from the Labour-led government in Wales and the SNP in Scotland.

But education has seen problems during this pandemic including the failure of the government to get all children in England back in the classroom before the summer break.

Mr Williamson remains in his job for now but he faces another significant test almost immediately – making sure the government does deliver this time on its pledge to open England’s schools next month.

Mr Williamson announced on Monday that a 5% cap on the number of extra students a university can take this year has been lifted.

Dr Tim Bradshaw, chief executive of the Russell Group which represents 24 leading universities, said support would be needed to help with expected increases in student numbers.

“There are limits to what can be done by the university sector alone to address that uncertainty without stretching resources to the point that it undermines the experience for all, not to mention ensuring students and staff are kept safe as we follow the steps needed to fight the Covid-19 pandemic,” he said.

Some students are now anxiously waiting to find out if they will be accepted onto their courses now that their teacher-assessed grades have been reinstated.

Zainab Ali, 18, from London, said it had been an awful and confusing experience – having initially been rejected from her first-choice of Queen Mary University of London. “I felt like I’ve been really let down. It was really, really stressful,” she said.

And Emily King, from Whittlesey in Cambridgeshire, said being downgraded from a C to a U in her A-level biology had “really knocked her confidence” and meant she had been rejected by the University of Lincoln.

It is not clear if there is any guarantee that admissions decisions can be revisited if a course is already full, and some universities, including Durham, Sheffield, Bristol and Liverpool, had stopped offering places through clearing by Monday.

The Universities and Colleges Admissions Service (Ucas) said 193,420 18-year-old applicants across the UK were placed with their first-choice university, which is higher than at the same point last year.

A Ucas spokesman said students who have not got into their first-choice institution should seek advice from their parents or teachers before contacting the university.

The government has said that students who accepted offers based on their downgraded results would be able to release themselves if another offer is reinstated based on their updated grades.

Prof Katie Normington, vice-chancellor of De Montfort University, told BBC’s Newsnight there was a lot of work for universities to do and it was not yet clear how they would receive the new results or process them.

She said: “I think all of us, as universities, will be looking at how we will treat those students fairly and we will be attempting to do that. It is obviously a lot of work for us but there are a lot of opportunities out there for students at the moment.”

‘Too slow to act’

Sam Freedman, who was a senior policy adviser to the Department for Education between 2010 and 2013, said he was surprised Mr Williamson had not resigned over the handling of A-level results and said it “beggared belief” that the secretary of state had said he was only aware of problems over the weekend.

“I can’t think of many other education secretaries who wouldn’t have already resigned,” he said.

Seema Malhotra, shadow employment minister, said the government had been “too slow to act” and the “crisis” had come at a “huge cost for children, their families and for the education sector”.