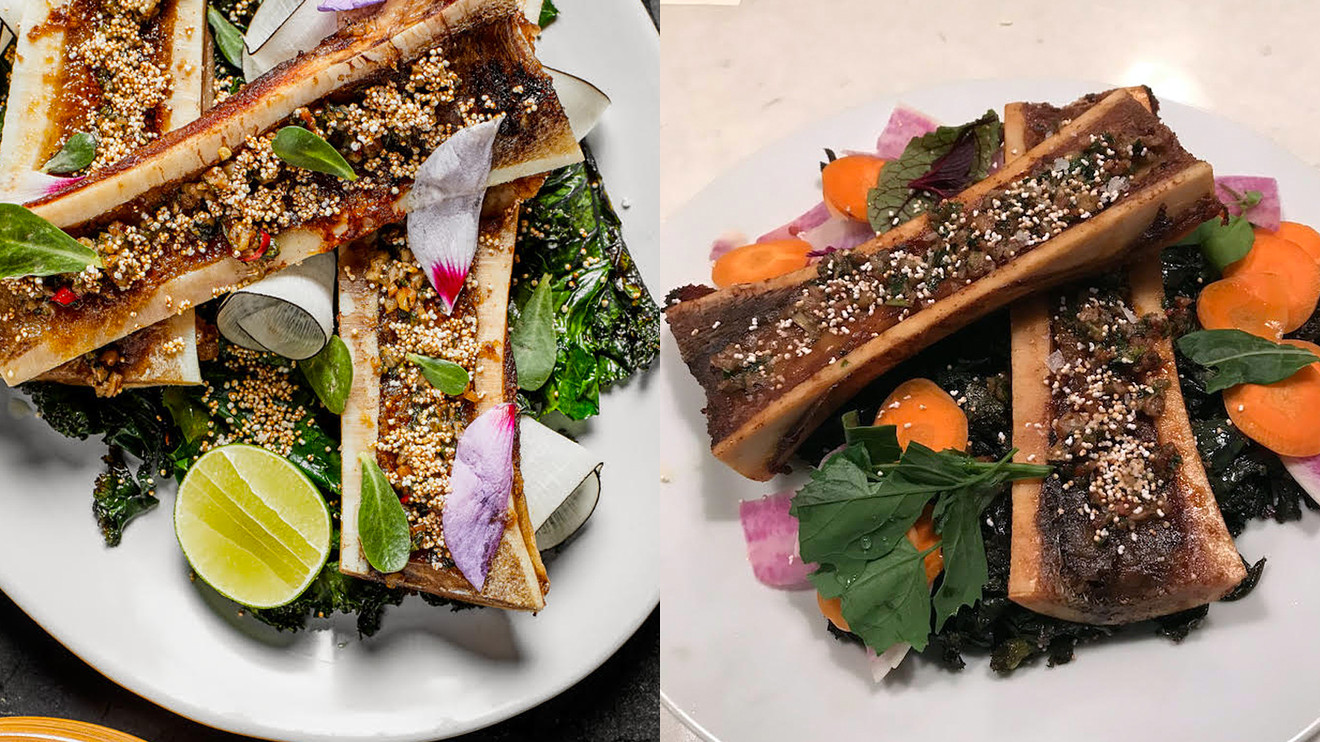 It doesn’t take a lot to make me nostalgic for how we used to dine out in the old days — by which I mean the roughly 250 years from the invention of the restaurant until mid-March of this year. One especially powerful memory, though, comes from a meal just a month before everything changed, at the year-old modern-Mexican restaurant Comedor, in Austin, Texas.

In particular I’m thinking of executive chef Gabe Erales’s signature bone marrow tacos: glistening roasted marrow bones, stacked like campfire wood over a bed of greens wilted in smoked butter, and topped with a nutty, fragrant gremolata made of pecans and the herb hoja santa. They are sweet and smoky, unctuous and beefy, filled with a rat-a-tat succession of textural pops and snaps. Matthew Odam, the restaurant critic at the Austin American-Statesman, described the dish as “decadent savagery.” And in GQ magazine’s annual list of Best New Restaurants, I noted the dish as one of my favorites of the year. When I close my eyes, I can practically taste it — except that’s cheating, because the truth is that I ate the dish again just a few days ago, in my own kitchen, 500 miles from Comedor’s dining room.

Comedor is one of many restaurants across the country that turned to creating Blue-Apron-like, ready-to-cook meal kits as a way to make it through the days of pandemic-related closures and social distancing. Even as Texas has allowed restaurants to open their dining rooms, owners William Ball and Philip Speer (who is also the restaurant’s pastry chef) have opted to stay closed for the foreseeable future, even for takeout and delivery. Instead, they recently began offering meal kits from Comedor and several other restaurants on a newly minted online platform called Assembly Kitchen. Since March 31, they have delivered close to 500 bone marrow kits in the Austin area, expanding in recent weeks to other Texas cities. They plan to begin shipping nationally on June 1, with the kit costing $33 plus shipping.

Anxious to try, after more restaurant-less weeks than I can remember having endured in my adult life, I requested a sample, and FedEx soon dropped off an insulated package at my house in New Orleans. Inside, chilled by ice packs, was an assortment of portioned and neatly labeled ingredients: A bag of gnarled and primitive-looking bones, split in half to reveal the marrow within; another of dark green quiletes, pungent Mexican greens; a stack of masa tortillas; and then an assortment of smaller cups and bags containing ingredients both esoteric (smoked butter, puffed amaranth) and common (vegetable oil, sea salt), presumably for those newly minted home cooks who have literally zilch in the cupboard. If nothing else, this was a lesson in the number of individual ingredients and “touches” that go into an average restaurant dish. There was a set of instructions and a card with a QR code that led to Comedor’s Spotify playlist.

“
The truth is, the meal was delicious, offering all the primal pleasures and sophisticated balances of flavor I remembered from the first time I ate it. It was also a little depressing.
”

I can’t say there was tremendous buy-in among my household on the menu item in question. My girlfriend announced early she would abstain, perhaps thanks to the fact that I had recently described in print a different bone marrow dish as producing a “slippery, snotty sluice of flavor” (I meant it as a compliment). Our 5-year-old daughter looked me in the eye and declared, “Bones are for dogs.”

Their loss. I cranked the playlist, starting with “Fire” by Black Pumas. The house was soon filled with the smell of roasting beef. I managed to use a mandoline on the whole carrots and radishes without injury (this theoretical cook who has no oil apparently does, for some reason, have a mandoline), and assembled the components on a plate in as close an approximation as possible of Comedor’s colorful platter. As at the restaurant, I scooped the gelatinous contents of each bone onto the tortillas, topping each taco with greens, vegetables and gremolata. At the end of the printed recipe was the recommendation to do a luge shot of mescal through one of the hollowed-out bones. I am not one to ignore instructions. I didn’t have the recommended brand on hand — Rey Compero Espadin — but one does what one can in times of crisis.

The truth is, the meal was delicious, offering all the primal pleasures and sophisticated balances of flavor I remembered from the first time I ate it. It was also a little depressing — with some of the sense of deflation that can follow the solitary completion of certain other acts you’d ideally perform with others. I thought about how that playlist had sounded in Comedor’s sleek dining room in downtown Austin, mingled with the hum of fellow diners’ conversations. I thought about my own conversation there, catching up with a friend as we assembled and devoured our tacos. If there’s one thing the past weeks of takeout and delivery have made abundantly clear, it’s that a restaurant is more than simply food.

But then I thought about the alternative: How, across Texas and other states, restaurants were beginning to open up, with reduced capacity, pieced-together precautions, undeniably good intentions and a fair amount of wishful thinking. I did not envy any of the business owners faced with the excruciating decision of whether or not to open, but I was glad Comedor was staying closed. And knew that I would not be ready to go eat there yet if they were not.

So for the moment, bone marrow tacos in my kitchen would have to do. They were not perfect, but they were all I could hope for at this moment: They were enough.

These cool gadgets are all perfect Memorial Da...