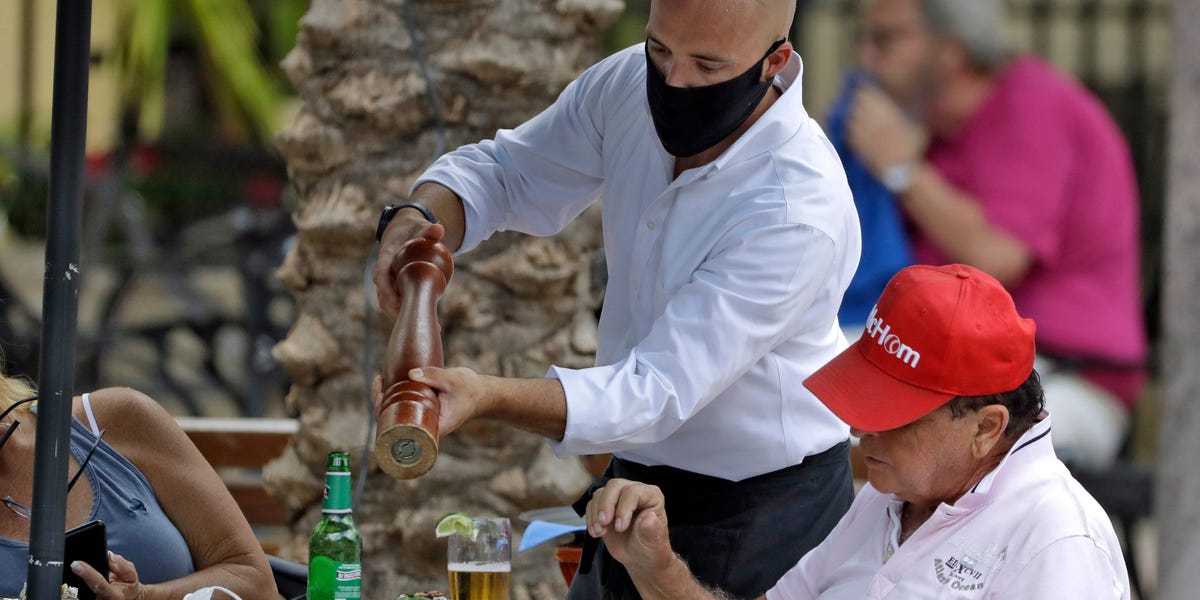 A sports bar owner in West Melbourne, Florida, has a no-mask policy for his customers amid the coronavirus pandemic, said he finds it “completely unnecessary to have facemasks at all. We do not support; we do not believe in them.”

Gary Kirby, the owner of Westside Sports Bar and Lounge, started banning masks on September 11, placing a “Masks Prohibited” sign the front door. Kirby said anyone who refuses to take off their face coverings will be forced to leave the bar, WESH 2 reported.

“I personally don’t agree with it. So that’s why I made the decision to… I don’t want them here,” he said in an interview with Fox 35 Orlando. “It’s hindering our lifestyle as we know it.”

As of September 19, there have been at least 677,652 cases and 13,224 deaths in Florida since the beginning of the pandemic, according to The New York Times. Medical, science, and national experts urge people to wear face masks to stop the spread of the coronavirus, which has killed nearly 200,000 people in the US.

People living in West Melbourne, which is in Brevard County, are encouraged to wear a mask and follow the Center for Disease Control and Prevention’s (CDC) recommendations, Don Walker, the communications director for Brevard County, previously told Fox News. Nevertheless, Walker said there is no law enforcement for mask-wearing.

“It’s a business owner’s right to dictate what they want inside their private business. I don’t support (Westside’s) philosophy. But it’s their right,” he said.

Kirby claimed that while he “doesn’t approve” of face masks, he is cleaning and enforcing social distancing at the bar. He has a doorman to keep track of the number of people entering the bar, and he hasn’t had one positive case of coronavirus despite thousands of temperature checks, he claimed.

“I do agree that there is a virus, with a 1% death rate. I feel like we are statistically just as likely to get hit by a train,” Kirby told Florida Today.

Kirby previously said that the mask ban is a security precaution after an unsolved burglary that happened last month.

On August 7, a police report was filed after surveillance footage recorded someone who’s wearing a mask and a baseball cap entered Kirby’s bar and stole an unspecified amount of money, Sergeant Graig Erenstoft at the West Melbourne Police Department told Florida Today.

Kirby said his frustrations around the ongoing investigation is one of the reasons why he issued a no-mask mandate at Westside Sports Bar and Lounge. He explained police told him “criminals would be capitalizing on the mask mandate all over using it to their advantage to get away with crimes,” and he also claimed that the burglar was wearing a surgical mask, the New York Post reported.

Since Kirby’s no-mask policy, he’s gotten a mix of death threats, bad online business reviews that are coming from Texas and California, and a wave of support from Facebook users. He told Fox News that he’s received hundreds of messages from fans showing support.

“I’m getting messages on my Facebook saying, ‘Hey, football, we’re coming there to watch the game,'” he told Fox 35.

Fauci slaps down Trump, says US going in 'wron...