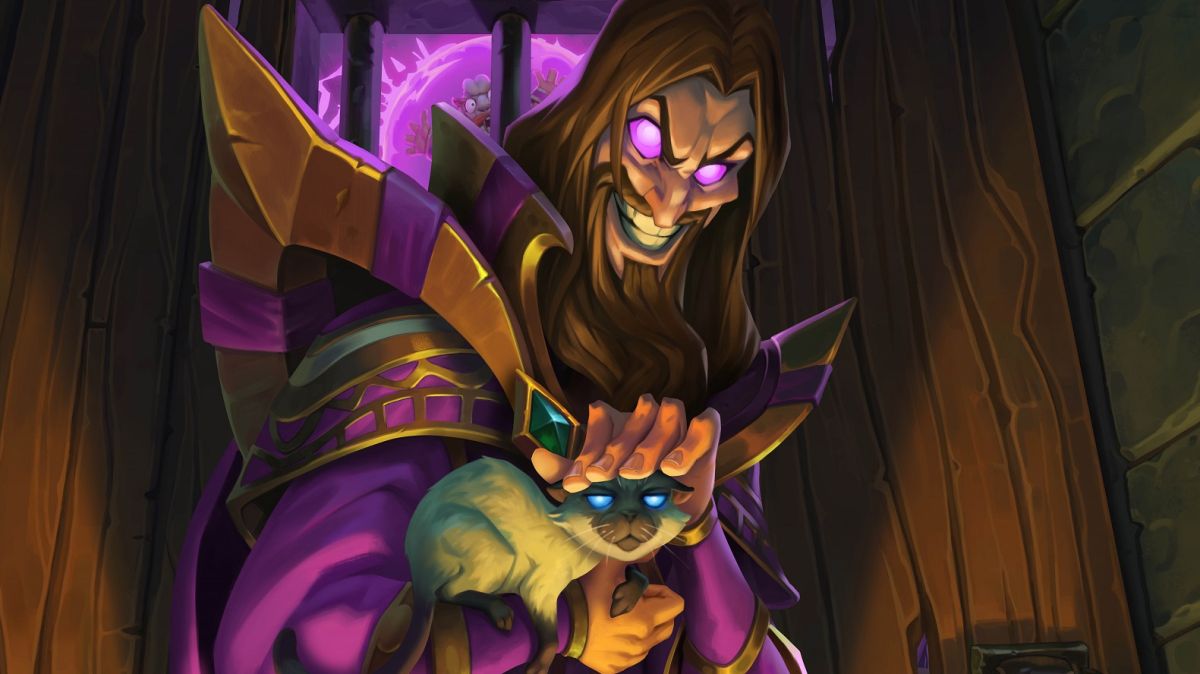 Blizzard’s decision to allow high-profile streamers to sample each new Hearthstone expansion a few days early hasn’t always sat well with the community. The argument goes that the therorycrafting session (which lasts a few hours) sucks some of the thrill of discovery out of launch day, with Blizzard’s obvious counterpoint being that the biggest personalities in the scene getting excited is priceless advertising for the new set. I can see both sides, and let’s be real, was never going to turn down a chance to mess with the Scholomance Academy a week early.

What I hadn’t reckoned with was how many of the world’s best players would be handing my arse to me live on Twitch. In my first game I queued against David “Dog” Caero, and somehow emerged victorious with my janky Stealth Rogue deck, despite my best attempts to throw at the end. It turns out Dog thought I was BM-ing because my attacks were ordered so badly, but the reality was that the excitement at having the W in sight caused me to completely forget he had Bulwark of Azzinoth up.

Glide is a new Demon Hunter card, and as such will be nerfed a week after it’s released. Don’t blame me, those are just the rules.

Over the course of the afternoon I faced Kibler, Alliestraza, Tyler, Zalae, RDU and Trump multiple times. For context, I’ve only hit Legend four times, and play almost exclusively aggressive/midrange deck which I take from Hearthstone Top Decks and rarely alter. My creativity extends to possibly adding Harrison Jones if there are a lot of weapons around, so facing brilliant players with my unrefined homebrews was more than a little daunting.

And sure enough, I lost more than I won, though I did take down some big names, including a second win over Dog. My nemesis swiftly became Jeffrey “Trump” Shih, one of the biggest and most beloved Hearthstone streamers. Miraculously I also won my first game against him, thanks to a new Demon Hunter card called Glide. It shuffles both your hand and your opponent’s into the deck and redraws four new cards. At the point I played the card, Trump was on the verge of assembling an Exodia-style combo which instantly got trashed. “I’m crying,” he noted.

That was the last time I would sadden the self-proclaimed Mayor of Value Town, though, as he proceeded to stomp me in our next three meetings, albeit in a slow, grindy kinda way. Losses tend to sting less during the experimental phase of any new expansion, as they aren’t coloured by the repetition of dying to the same thing ad nauseam. “This bullshit? Again?” And obviously it’s too early to accurately judge the power level of the new cards precisely, but I do however have a few findings from my afternoon of getting schooled by better Scholomance players.

According to HSReplay, Druid is the worst performing class in the meta right now. I don’t expect that to last once Scholomance drops on 6 August. Both of Druid’s main archetypes—Mana Ramp and Token Swarm—are getting new toys. On the coin, you can play the new card Gibberling, which copies itself thanks to the new Spellburst mechanic that activates an additional effect on the card the first time you play a spell, and then combo them with buff cards like Power of the Wild and Adorable Infestation to generate a disgustingly strong board as early as turn two.

Even more gross is a new 7-Mana card called Guardian Animals, which summons two Beasts from your deck that cost 5 or less Mana and gives them Rush. Canny Druid players have already worked out that if you only include Beasts that cost 5 then you can guarantee max value. The prime candidates are also new cards: Lake Thresher, Twilight Runner and Teacher’s Pet (the latter is one of the new Dual Class cards, so in this case Hunter players can also use it).

The first time Guardian Animals happened to me I did a double take and had to re-read the text, so ridiculous is the Rush effect on already powerful minions. And yes, 7-Mana is a lot, but this is Druid, which now has a new 0-Mana card called Lightning Bloom that gives you 2 bonus Mana crystals (which you pay for on the next turn, via Overload).

Once the meta settles it may be that hyper aggressive decks chase greedy druids off the ladder, but expect to see a lot of this nonsense in the early days. It should also be noted that Survival of the Fittest, a 10-Mana spell that gives +4/+4 to all minions in your hand, deck and battlefield, seems way to easy to pull off—particularly when comboed by Kael’thas Sunstrider, a card which should never have been printed.

2. Soul Fragments are sweet to play

I spent quite a bit of my playtest messing around with the new Soul Fragment system. This mechanic is exclusive to the Demon Hunter and Warlock classes, and involves shuffling these Soul Fragments into your deck, which either heal you for two when drawn, or can be consumed by the Battlecry of other cards in return for powerful effects. How powerful? Demon Hunter gets Soulshard Lapidary, a 5-Mana 5/5 that also gives your hero +5 attack. Meanwhile, Warlock has Void Drinker, a 5-Mana 4/5 Taunt Demon that gets +3/+3. Strong stuff.

Tying this cycle together is Soulciologist Malicia, a 7-Mana Legendary 5/5 with text that reads: “Battlecry: For each Soul Fragment in your deck summon a 3/3 Soul with Rush”. In practice I was often able to summon three or four rushers, and these sort of board-on-a-stick cards tend to be powerful and see play. As with previous build-arounds, such as Galakrond and C’thun, the ideal number of activators you need to include in your deck won’t become clear until we’ve spent plenty of time with the expansion, but what I will say is that Soul Fragments are super fun and flavourful.

3. The strongest cards are sometimes the least expected

As with most players, my immediate thought was to try out as many sexy-sounding Legendary cards as possible. Things like Lorekeeper Polkelt, which reorders your deck from highest to lowest cost after you play it, and Vectus, who summons two 1/1s which receive Deathrattle effects from your minions that died earlier. Vectus was the reason I beat Dog first time around, because evolve shenanigans meant that one of the Deathrattles in my pool was Anubisath Defender’s +3/+3 hand buff. But generally I found him a little clunky to get value from. Likewise, though clearly a powerful effect, Polkelt’s deck re-ordering requires thought from a bigger brain than mine to get the most out of.

More immediately impressive were a couple of cheap neutral minions that look like they’ll slot into a lot of decks for years to come. Intrepid Initiate is a 1-Mana 1/2 that gains +2 Attack from the Spellburst effect. It’s not flashy, but it’s easy to activate, and a 3/2 for 1-Mana is just good. Even better is Voracious Reader. She’s a 2-Mana 1/3 that at the end of your turn draws cards until you have three in hand. Players who remember Divine Favor in Paladin will know how important cheap refill is, and so you can expect to see—and be annoyed by—a lot of her once Scholomance Academy swings its gates open next Thursday.

Fall Guys: How One of its Hardest Minigames Wa...