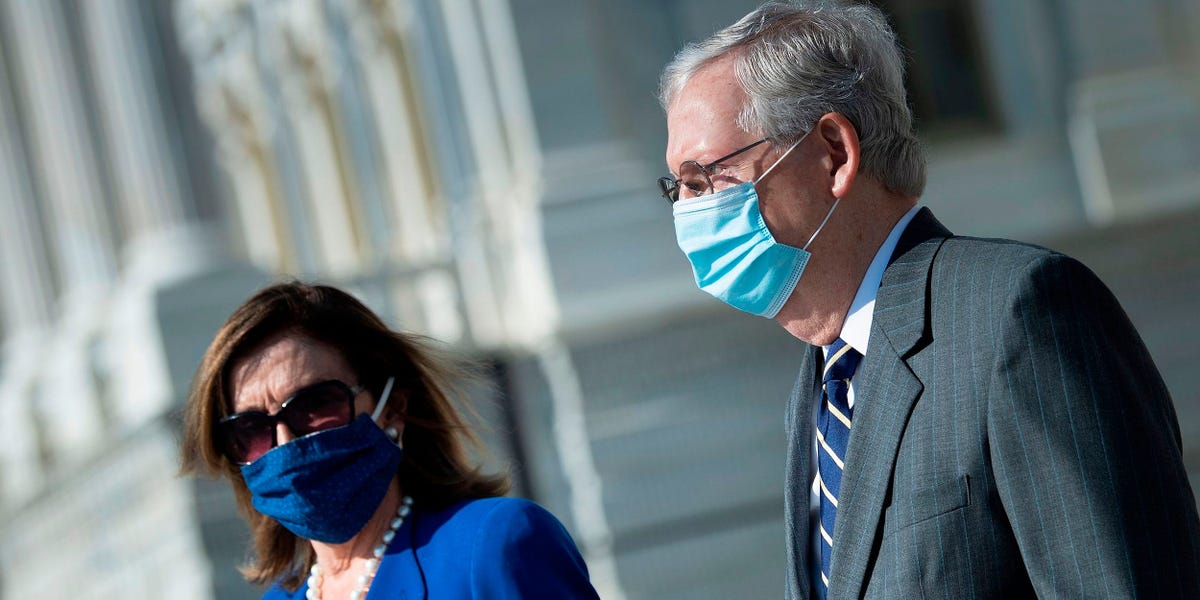 Republicans and Democrats are struggling to settle longstanding policy differences in negotiations over what’s expected to be a $900 billion emergency spending package.

“It’s a little bit of whack-a-mole, you know, whack it here and something else pops up,” Sen. John Thune of South Dakota, the second-ranked Republican, told reporters on Capitol Hill late Thursday. “There’s a lot of interaction between the moving parts of all this, and getting it all lined up at the same time is proving to be pretty hard.”

Congress barely averted a shutdown on Friday evening. Now lawmakers must rush to strike an agreement that passes both chambers and lands on President Donald Trump’s desk for his signature before 11:59pm on Sunday. But the fragile state of negotiations means they could be easily derailed.

Detailed below are three of the major hangups keeping lawmakers from enacting a new pandemic aid package.

Democrats have pushed for a fresh wave of $1,200 direct payments, which has also drawn Republican support from Sen. Josh Hawley of Missouri. It’s also backed by Sen. Bernie Sanders, an independent from Vermont. But Republicans support $600 stimulus payments in a bid to keep the overall cost of the package below $1 trillion.

Sen. John Thune said Republicans are attempting to tighten the eligibility on who could receive a second federal payment.

“Designing that in a way that maximizes the amount that an individual or family can receive and try and target it to the people who need it the most — I think is right now one the biggest challenges,” he told reporters on Capitol Hill on Thursday. “But hopefully they can get that done.”

Back in March, Congress and President Donald Trump approved a $2 trillion economic aid package. They included $1,200 stimulus checks for tens of millions of Americans, plus an extra $500 per child. Individuals earning below $75,000 yearly qualified for the full amount.

Read more: JPMorgan says stocks are primed for sustained gains in a way they haven’t been in years — and identifies 43 names to buy for above-average earnings growth in 2021

(2) The lending authority of the Federal Reserve

Republicans and Democrats are clashing over the Fed’s lending authority. Republicans want to end emergency programs after December 31, arguing that keeping the programs could cause the Fed to overstep its historic boundaries as a lender of last resort. But Democrats are assailing it as a move designed to cripple the incoming Biden administration.

The economic-rescue package enacted in March included $454 billion earmarked for the Treasury to backstop new emergency lending by the Federal Reserve. The central bank set up an array of programs to aid the flow of credit and provide loans to mid-sized businesses, as well as state and local governments.

The Trump administration stepped in last month to shut off those lending programs after Dec. 31, the expiration date, a move that infuriated Democrats. Experts say the program provided a critical backstop and helped stabilize the economy earlier this year. Fed Chair Jerome Powell has said he would prefer the programs continue for now.

Republicans and Democrats are clashing about a federal pot of money that would be allocated to the Federal Emergency Management Administration, The Washington Post reported. Republicans argue it could provide a backdoor to state and local assistance, which many strongly oppose.

Federal assistance to states and municipalities has long been an vexing issue on Capitol Hill. Democrats pressed for nearly $1 trillion in aid to strapped state and local governments in an expansive rescue package the House approved in May. Many states are weathering significant budget shortfalls because the pandemic hit their main sources of revenue like sales taxes.

Read more: Fund manager Brian Barish has returned more than 550% to investors over 2 decades, and he just had 2 of his best years ever. He told us how he did it — and 3 top picks for the next 5 years.

It will likely be a top priority for President-elect Joe Biden after he assumes office in January. He’s called the lame-duck rescue package “a down payment” on numerous occastions and has warned of state and local governments shedding many more workers.

“They’ve already laid off more than a million workers,” Biden said this month. “Even more teachers, firefighters, cops will lose their jobs unless federal government steps up now.”