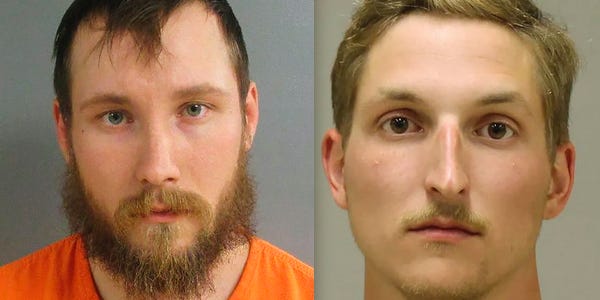 Two of the men charged with terrorism-related crimes and a plot to kidnap the Michigan governor on Thursday are Marine Corps veterans, a service spokesperson reportedly said.

A Marine Corps spokesman told Marine Corps Times on Saturday that Joseph Morrison, 26, was a Marine reservist since 2015. Morrison was reportedly discharged as a lance corporal, a junior enlisted service member, on Thursday.

The spokesman told the Marine Corps Times that his recent discharge was unrelated to the alleged plot he was implicated in.

Morrison was one of the cofounders of an armed militant group dubbed the “Wolverine Watchmen,” according to state investigators. The group was said to have had a broad goal of fueling a “civil war leading to societal collapse.”

Another Marine veteran, 23-year-old Daniel Harris, enlisted in the service when he was 18 in 2015, according to the Marine Corps Times. Harris, who was an infantryman, was discharged in 2019.

Harris was one of six men charged by federal attorneys for allegedly conspiring to kidnap Gov. Whitmer.

Both of the veterans’ military awards mentioned in the report were unremarkable.

A total of six men, including Harris, are facing federal charges with the plot to kidnap Democratic Gov. Gretchen Whitmer of Michigan. Seven others, including Morrison, are facing state terrorism-related charges.

The group, which has ties to the amorphous militant “boogaloo” movement, allegedly urged its members to conduct surveillance on Gov. Whitmer’s private home and gather information on law enforcement officers to kill them.

Adam Fox, one of the six men who was charged in the plot, was quoted saying he needed “200 men” to attack the Capitol in Lansing and take hostages, including Whitmer.

“Snatch and grab, man. Grab the f—in’ governor. Just grab the b—-,” Fox said during a July 27 meeting recorded by an informant, according to the affidavit. “Because at that point, we do that, dude — it’s over.”

Gov. Whitmer has been criticized by conservative activists for the state’s response to the coronavirus. In April, Whitmer extended a stay-at-home order that imposed restrictions on businesses that were classified as essential. The order was later rescinded as part of the state’s reopening plans. The armed group’s associates characterized Whitmer as a “tyrant b—-,” according to a federal affidavit.

“All of this is something that he didn’t envision happening, so he has given me information that makes me call into question at least some of the things that are related in the complaint,” Parker Douglas, the attorney for Harris, said to WJRT-TV. “And that just means certain things that may have been said or related that he believes may have been taken out of context.”

How to make sure your 'AI for good' project ac...