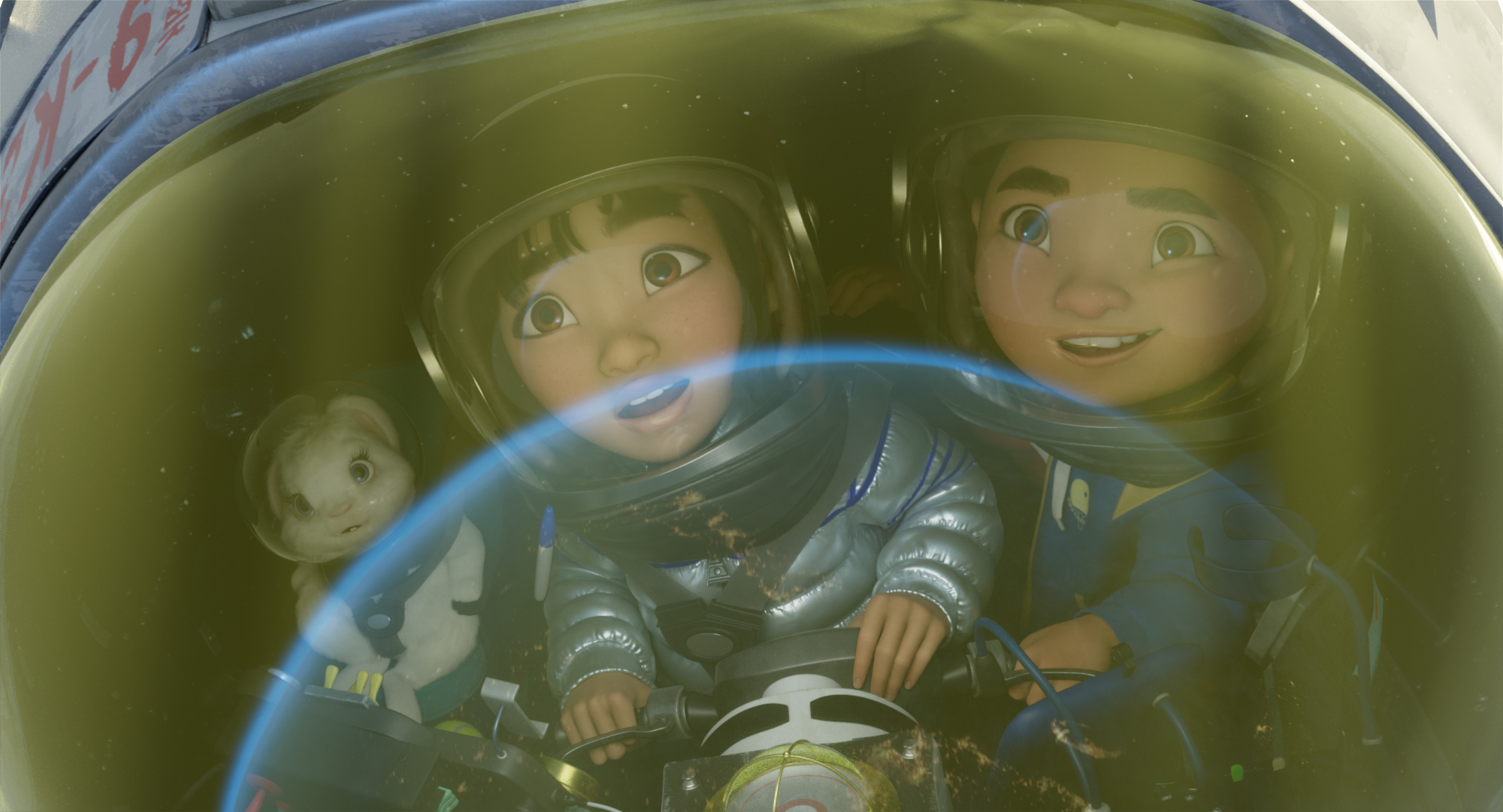 In animation, the only limitation is the filmmaker’s imagination. Unbound by the physical world, this medium can illustrate stories about talking animals, enchanted realms, menacing monsters, sci-fi odysseys, or the surreal adventures of a severed limb. Unique visions are realized through hand-drawn animation, computer graphics, or stop-motion techniques, each bringing curious characters to vivid life. So what vision will you choose?

Whether you’re seeking something silly, sophisticated, or family-friendly, we’ve got you covered with a collection of animated features, celebrated and sensational. All of them available now on Netflix.

Jack Black brings his limitless energy to the lovable panda at the center of this animated martial arts epic. In a wondrous world of animal warriors, the renowned kung fu masters known as the Furious Five are graceful, serious, and focused. Clumsy, excitable, and easily distracted, a panda named Po (Black) only dreams of being in their company. That is, until an explosive twist of fate lands him the honor of Dragon Warrior. Now, it’s up to him — and his dubious siblings in arms — to defeat the vicious snow leopard Tai Lung, who would bring pain and ruin to the Valley of Peace.

How to watch: Kung Fu Panda is streaming on Netflix.

Over the Moon
Credit: Netflix

If you’re searching for something with a Disney feel, then visit the stunning feature directorial debut of Glen Keane, an animator of such classics as The Little Mermaid, Aladdin, Tarzan, and Tangled. In this out-of-this-world animated musical, Keane applies decades of Disney lessons learned to creating a bittersweet and beautiful film out of a Chinese legend. Grieving the loss of her mother, an inventive young girl builds a rocket so she might fly to the moon and meet the mythical goddess who resides there. Achieving what seems impossible is the easy part for this heart-warming heroine, but healing from the hurt of grief is harder. A moving yet mirthful story studded with stellar songs and radiant characters is brought to life by a voice cast that includes Cathy Ang, Phillipa Soo, Ken Jeong, Margaret Cho, Sandra Oh, John Cho, and Kimiko Glenn.

How to watch: Over the Moon is streaming on Netflix.

Based on an outlandish book by Lois Lowry, this Netflix original centers on a deeply dysfunctional family in need of some wild changes. Mr. and Mrs. Willoughby have four adorable, eager, and talented children, whom they utterly despise. Thus, life is very hard for eldest Tim (Will Forte), dreamer Jane (Alessia Cara), and oddball twins Barnaby A and Barnaby B (Seán Cullen). That is until they concoct a wacky scheme that sends their parents off on a perilous vacation, from which they may not return! However, the siblings’ deadly plan for independence is challenged when a plucky nanny (Maya Rudolph) arrives at their door. Soon, agonies and antics give way to the jubilant adventure of a lifetime. Director Kris Pearn’s sharp design style and a snarling narration from Ricky Gervais pairs with Lowry’s dark plotline to give this outrageous animated feature a cheeky yet charming edge.

How to watch: The Willoughbys is streaming on Netflix.

From Laika, the studio that brought us The Boxtrolls, Coraline, and Missing Link, comes the quirky comedy about a boy who talks to the dead. Far from haunted, 11-year-old Norman Babcock (Kodi Smit-McPhee) is happy to carry on conversations with the ghosts who mill about the quaint town of Blithe Hollow, Massachusetts. Sure, his peers think he’s a weirdo. But once an ancient curse unleashes lurching zombies, Norman and a motley Monster Squad prove to be the heroes this hollow needs. Directors Sam Fell and Chris Butler bring a slew of playful horror allusions into this family-friendly adventure, which has a crackling voice cast that includes Anna Kendrick, Casey Affleck, Christopher Mintz-Plasse, Jeff Garlin, John Goodman, and Elaine Stritch. Yet the very best part of this critically celebrated cartoon might be the incredible stop-motion animation, which gives this spooky story a life — and look — all its own.

How to watch: ParaNorman is streaming on Netflix.

The Mitchells vs. the Machines
Credit: NETFLIX

Sony Pictures Animation has given audiences such daring and dynamic animated movies as Surf’s Up, Hotel Transylvania, and Spider-Man: Into the Spider-Verse. This zany 2021 release centers on a family who’s battling back the robo-apocalypse with togetherness, internet savviness, and a walleyed pug named Monchi (voiced by social media icon, Doug The Pug). The Mitchells’ adventure into chaos begins when daughter Katie (Abbi Jacobson) is poised to go off to college. Desperate for one last family-unifying road trip, her dad (Danny McBride) piles the whole family into his beater of a vehicle, unknowingly charting a fateful route into heroics. Director Mike Rianda infuses Katie’s excitable perspective throughout the film by working in internet memes, social media-style reactions, and blitz of bonkers visuals. It’s a bold move that might alienate some viewers but has largely won the acclaim of critics and kiddos.

How to watch: The Mitchells vs the Machines is streaming on Netflix.

Set centuries ago, Klaus unwraps a spirited origin story for Santa Claus, from his signature look, flying reindeer, and the tradition mailing of wish lists. Curiously, it all begins with a selfish postman, who loathes his job even more than he loathes the violent locals of his remote, icy post. Jason Schwartzman and J.K. Simmons warm things up, perfectly cast in roles snarky and restrained respectively. Together, they build a tender tale of unlikely friendship that’s reminiscent of the wild fun and odd couple dynamic of Disney’s The Emperor’s New Groove. Notably, with this Netflix original, director Sergio Pablos pioneered an animation style that blended elements of hand drawn techniques and computer graphics, creating a distinctly beautiful film that’s too wonderful to watch only once a year.

How to watch: Klaus is streaming on Netflix.

Craving something creepy but kid-friendly? Then step on up to this sensational 2006 film, in which the Big Bad is a towering, sentient, old house that gobbles up toys as well as trespassing children. While the premise might sound perturbing, children will relish the tale of three spirited kids who not only discover the Monster House’s horrors but also its hidden heart. A surprisingly poignant finale follows a bunch of frights and fun, making this a great pick for family movie night. Using motion-capture animation, director Gil Kenan taps into Amblin Entertainment’s established aesthetic, where grounded drama meets freaky fantasy. Adding oomph — and some grown-up curb appeal — is a voice cast that includes celebrated actors, like Steve Buscemi, Fred Willard, Catherine O’Hara, Maggie Gyllenhaal, Kathleen Turner, Jon Heder, and Jason Lee. Trick or treat? Why not both!

How to watch: Monster House is streaming on Netflix.

Seeking something with the vibe of Studio Ghibli? Then, you’ll want to dive into this charming mermaid tale. Directed by Masaaki Yuasa, this seaside-set anime follows an introverted middle schooler, whose world is forever changed when his band’s practice session attracts the attention of a little mermaid. A giddy shapeshifter with unflappable enthusiasm, Lu livens up this quiet fishing village with song, dance, and — of course — an adorable merpuppy. Full of imagination, vivid colors, and heartwarming moments, Lu Over the Wall offers delights that the whole family can enjoy. For anime purists, Netflix offers a subtitled version with the original Japanese voice track. However, a solid English overdub is also available, which might be preferred for viewers not ready to read their movies just yet.

How to watch: Lu Over the Wall is streaming on Netflix.

For a road trip adventure proudly packed with every color in the rainbow, check out this Netflix original about the eponymous alligator boy. Raised in the bayous of the American South, Arlo (Michael J. Woodard) has never fit in with the humans or the critters. So, with a song in his heart and a gift for making friends, he sets forth to find his fortune — and his long-lost father — in New York City. Along the way, he’ll meet a parade of unorthodox characters, voiced by the likes of Jennifer Coolidge, Tony Hale, Jonathan Van Ness, Mary Lambert, Brett Gelman, and Flea from the Red Hot Chili Peppers. On top of silly shenanigans and heartwarming song numbers, director Ryan Crego creates a world of wonder and weirdness that’s sure to enchant.

How to watch: Arlo the Alligator Boy is streaming on Netflix.

Seeking something more mature? Then, check out Jérémy Clapin’s animated French drama about a dismembered hand searching for the body who lost it. This setup might sound grisly. Yet, there’s a sprightly sense of wonder to the journey of the hand, whose fingers race from rat-infested subways to cushy apartments and lofty rooftops. The heart of the film, however, is the interwoven tale of love and loss. In search of direction, dreamer Naoufel thinks the witty Gabrielle might be his North Star. But life and romance are rarely so simple. With unique style, sophisticated storytelling, and a challenging gimmick, I Lost My Body not only won over critics, but also the Academy Awards voters, earning an Oscar nod for Best Animated Feature in 2020. For those who struggle with subtitles, Netflix also offers an excellent English-language overdub.

How to watch: I Lost My Body is streaming on Netflix.